The pioneer of radio had constructed a massive tower at his home/laboratory in Colorado Springs for the purpose of experimenting with wireless power, but instead may have accidentally become the first human being to receive a message from the cosmos.

“I have a deep conviction that highly intelligent beings exist on Mars,” Tesla told a reporter from the Albany Telegram in 1923. “While experimenting in Colorado…I obtained extraordinary experimental evidence of the existence of life on Mars. I had perfected a wireless receiver of extraordinary sensitiveness, far beyond anything known, and I caught signals which I interpreted as meaning 1–2–3–4. I believe the Martians used numbers for communication because numbers are universal.” 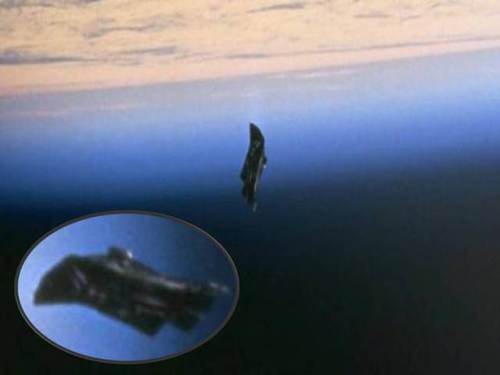 According to monitoring agencies around the world, The Black knight satellite has been transmitting radio signals for over 50 years now.

Rumors are that it was Nikola Tesla the first man to “intercept” a signal from the black knight satellite in 1899 after building a high-voltage radio device in Colorado Springs.
Since the 1930?s Astronomers worldwide have been reporting strange radio signals which allegedly come from the “Black Knight”.

In 1957, Dr. Luis Corralos of the Communications Ministry in Venezuela photographed it while taking pictures of Sputnik II as it passed over Caracas. In 1957, an unknown “object” was seen “shadowing” the Sputnik 1 Spacecraft. According to reports, the “unidentified object” was in Polar orbit.

In 1957. The United States nor the Russians possessed the technology to maintain a spacecraft in Polar Orbit.
The first Polar orbiting satellite was launched in 1960.

Polar orbits are often used for earth-mapping, earth observation, capturing the earth as time passes from one point and reconnaissance satellites. This would put the Black Knight in the category of an observational Satellite.

In the 1960?s the Black Knight satellite was located once again in Polar Orbit. Astronomers and Scientists calculated the object’s weight to be over 10 tons which would be at that time the Heaviest Artificial Satellite to orbit our Planet.

The Black Knight’s orbit was unlike any other object orbiting Earth.

The Grumman Aircraft Corporation formed a committee to study the data received from the observations made but nothing was made public.

In 1963, Gordon Cooper was launched into space. On his last orbit, he reported seeing a glowing green object in front of his capsule in the distance moving towards his Spacecraft. The Muchea tracking station, in Australia, which Cooper reported the object to, picked up this Unidentified object on Radar travelling East to West.

On August 23, 1954 the technology magazine Aviation Week and Space Technology released a story about the Black Knight Satellite that angered the Pentagon who were trying to keep the information secret.