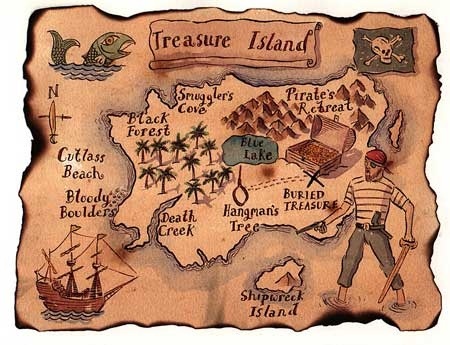 Many believe Fort Knox is nothing more than a vacant fortress meant to lull us into a false sense of security. Could it be true? Did the government burn through all of the gold?

The property of Fort Knox originates from a legend. Jonathan Swift, supposedly the real Long John Silver of Robert Stevenson’s Treasure Island, owned thousands of acres of what now is part of Kentucky. Like the famous pirate, Swift allegedly buried his treasure on the same property where Fort Knox sits. Some believe Swift’s wealth came from pirating Spanish merchants.

There were caves all over the property. Swift struck gold and silver and hid the mines. On a side note, Swift held ties to America’s forefathers and Freemasonry. Robert Stevenson, the author, must have known about the legend. The illustrated map of his Treasure Island is said to mimic a map of Swift’s hidden treasure in Kentucky.

In 1918, Fort Knox was built as a military camp. During the Depression it was renovated into America’s most famous vault. Artifacts such as the Constitution, Declaration of Independence, Articles of Confederation, Gettysburg Address, Gutenberg Bible, England’s Magna Carta, St. Stephen’s crown, and 900,000 carats of diamonds were kept inside the fortress.

President Franklin Roosevelt declared gold hoarding illegal and forced Americans to sell off their gold to the Federal Reserve. The government bought citizens’ gold for $20 an ounce, and later sold it for $35 an ounce, forcing the value of gold to skyrocket. Fort Knox supposedly stores a big chunk of the nation’s gold. The fortress is guarded by 30,000 soldiers, riddled with mine fields, surrounded with barbed razor wire, and loaded with booby traps such as poison gas. Security is so elaborate that it is said to be impregnable. New York Federal Reserve Bank supposedly holds more than Fort Knox. Maybe that vault is also empty. The U.S. Treasury’s Director of the Mint is in charge of the fort and no one is allowed visitation.Many believe the security can be breached.

In 1998, a letter surfaced, claiming responsibility for stealing the gold bars inside of Fort Knox in 1946. The letter has never been proved or disproved as legitimate.

So how much gold is supposedly inside? The U.S. claims to store a little over five tons of gold bullion or 1-2 Olympic swimming pools worth of gold. The U.S. also claims to have more gold than China, USSR, Switzerland, Japan, and Saudi Arabia combined. They can get away with this claim because no one has ever audited the inventory. In 1953, President Eisenhower was curious. His audit had problems-lack of gold experts and only 5% of the gold was tested.

Many believe that if the audit was accurate, then 80% of the gold has been frittered away overseas and/or used in covert operations. In the ’70s, US currency was taken off the gold standard. Why? Did Nixon know the U.S. was out of gold?If the vault in Fort Knox is empty, then what happened? Conspiracy theory holds that the gold bars inside of Fort Knox were replaced with fake bars painted gold. The continued security is intended to keep the economy from collapsing. Other conspiracy theories state that the gold is gone, but other priceless artifacts remain. Shakespeare was right-all that glitters really isn’t gold!

Some speculate that dead alien bodies and UFOs sit inside the vault. Speaking of UFOs, another Fort Knox conspiracy rests on the reputation of Lt. Col. Philip Corso. He wrote a book about the Roswell incident being real. Many believe the alien technology is being stored inside of Fort Knox. Top secret shipments transferred from Area 51 to Fort Knox add fuel to the conspiracy.

The Kentucky Air National Guard sent out three pilots to check out a report of an unusual aerial object flying above Maysville, Kentucky. One of the pilots, Thomas Mantell, found the object which was reported as being bright white and round with a red border at the bottom. The object made its way over Fort Knox. Thomas Mantell followed it. His plane mysteriously spiraled out of control and crashed once he closed in on the object. He died instantly.