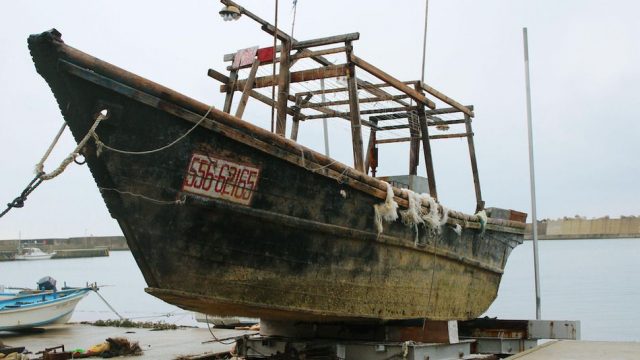 Mysterious “ghost boats” — wrecked wooden ships with decaying corpses on board — are washing up on the shores of Japan.

Nearly a dozen boats carrying decomposing bodies were found off the country’s northwestern coast in just one month, the coast guard said in December. The first boat was found in October, and in November officials discovered 10 bodies in three boats at Ishikawa prefecture. Later, they found another boat with six skulls and a body that was nearly intact.

Several signs point to North Korea. Most of the boats carried equipment and signs written in Korean, and one was had a scrap of cloth resembling a torn bit of the North Korean flag. However, authorities have not been able to confirm their origin or why the people on board perished.

A maritime expert told Japan’s biggest broadcaster, NHK, that the ships very closely resembled those used by people trying to defect from North Korea in the past. The boats could have tried going via the Sea of Japan instead of heading for China as previous defectors have done, because the Chinese route is now more heavily policed, an academic told CNN.