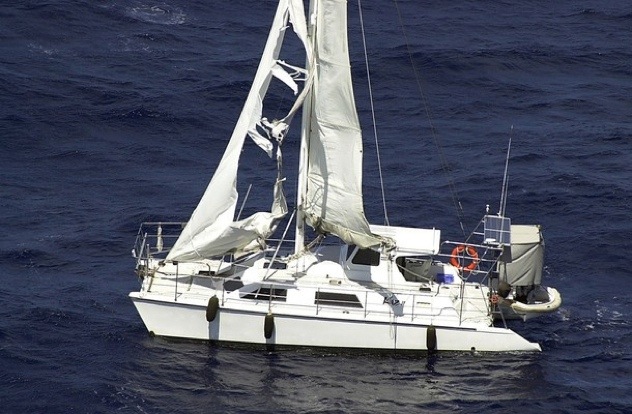 The Mary Celeste has gained a somewhat eerie notoriety following its discovery, apparently having been abandoned by its crew, with nobody remaining on board. This ghost vessel phenomenon seems to repeat itself, remarkably, in the modern case of the Kaz II. In April 2007, the Kaz II was traveling with its three-man crew along the northwest Australian coast, when air surveillance noticed it drifting oddly. Upon boarding, no trace of the crew members could be found.

However, no sign of trouble was discovered either. A laptop computer was still running, and the engine was on. Eating utensils were laid out on the table, while life jackets remained in their cases. The bizarre and disturbing mystery of the Kaz II essentially remains unsolved. According to Jon Hall of the Queensland Emergency Management Office, “What they found was a bit strange in that everything was normal; there was just no sign of the crew.”The state coroner eventually ruled that “the brothers fell overboard while attending to mechanical problems—however, the ruling is still only speculation.”

The sea was a bit choppy that afternoon on April 20, 2007. But that didn’t pose a problem for the experienced three-man crew of the Kaz II. Derek Batten was a fifty-six year old yachtsman with 25 years of nautical experience. He had meticulously planned out the route in which his yacht, the Kaz II, was supposed to navigate. He had invited with him his neighbors. Sixty-nine year old Peter Tunstead and his sixty-three year old brother, James. They too were no strangers to the sea. They had been sailing together since teenagers and were very savvy when it came to boat navigation and safety. The brothers also volunteered in the radio rooms of the Volunteer Sea Rescue unit. Suffice to say the Kaz II was no ship of fools.

When police boarded the Kaz II on the evening of April 20th, off the northern Australian coast, they felt as if they had stepped into the Twilight Zone. The Kaz, it was completely soulless! The experienced navigator had left the engines running and was nowhere to be found. And the brothers? Besides finding James’ sunglasses and shirt, there was no sign of them either. Something was off. As the police investigate the boat for any signs of the men, they find that whatever grim fate the men met, it caught them off-guard. A plate of food was set on the table, a laptop was left turned on and of course, the engines were still on. Gut feelings told the police that there was no foul play and it seemed to them that the men simply vanished. There were no signs that a rogue wave might have washed the men off the yacht. They did notice something important though. One of the sails was damaged. A big tear that ran vertically through the sail. Torn sail and running engines and missing crew? They might as well have stepped onto the decks of the infamous Mary Celeste.

During the forensic investigation, a video tape surfaced. Recorded on it, were the last moments of the three friends.

The last moments of the men were recorded by James on the morning of April 15th. Which is said to be shortly before their vanishing. The video shows Derek commandeering the vessel. Peter is seen fishing off the Kaz II in a very relaxing manner. From the video, the investigators noted that the engines were not running and that a long rope was trailing behind the boat. Another interesting fact is that James’ sunglasses and shirt are not seen in the location where they were found.

With this information, the investigators were able to understand the approximate location the men were in when they ran into trouble. The coroner ruled out foul play, but was not able to determine what actually happened to the bodies. Piecing together a possible scenario using the video tape, this is what State Coroner Michael Barnes believed happened to those aboard the Kaz II:

“On Sunday, 15 April 2007, at 10:05 A.M., the Kaz II was sailing in the vicinity of George Point. Up to that moment everything was going as planned but, in the following hour, their situation changed dramatically. The men hauled in the white rope that was trailing behind the boat and bundled it up on the foredeck, possibly to dry, next to the locker it was normally kept in. For unknown reasons, James Tunstead then took off his T-shirt and glasses and placed them on the backseat. The report says that since the men’s fishing lure was found entangled in the ship’s port side rudder, an obvious explanation would be that one of them tried to free the lure and fell overboard while doing so. Standing on the boat’s ‘sugar scoop’ platform (a platform at the back of the ship close to the waterline) while the boat is moving is perilous and falling in the water is easy, but getting back aboard almost impossible. One of the other men then came to the rescue of his friend, while Batten, still on board, started the motor and realized he had to drop the sails before he could go back for his friends.

As he left the helm to drop the sails, a deviation of the ship’s course or wind direction could have easily caused a jibe, swinging the boom across the deck and knocking Batten overboard. This could even have happened before Batten was able to untie and throw out the life ring to his friends. A blue coffee mug found near the life ring may support this. Since the boat was travelling before wind and at a speed of 15 kn (28 km/h), it would be out of reach of the men within seconds. The report states: “From that point, the end would have been swift. None of them was a good swimmer, the seas were choppy; the men would have quickly become exhausted and sunk beneath the waves.

The coroner’s conclusion seems like the most possible scenario. Possible…but it leaves a lot of doubt as well.

What are the chances that three experienced and cautious seamen fall out of a boat trying to save one another? I can understand the brothers falling overboard in an attempt to rescue one another, but why did the Derek, the man at the helm leave the engines on while he himself succumbing to the merciless sea in the last attempt to rescue his friends? How does that explain the torn sail? Could it have been that one of the brothers was climbing to fix the top of the sail and fell overboard, causing the other two to fall in as well in unsuccessful attempts at rescue? Maybe. But then I’d have to ask you: “What tore a gash across the sail?“

If you were to ask me, the other-worldly thinker, I’d say that there exists a speck of a chance that this could have been caused by a UFO. Seriously. Hear me out:

What if the men were visited by a UFO, or better yet, a USO –Unidentified Submerged Objects, to the non-geeks– could that possibly explain the men being caught off-guard by the alien craft that glided its way from the abyss? Hovering above their yacht, the craft’s exhaust or radiating force causes the sail to blow open. But what about the men? Abducted. Naw, that’s too wild of a conclusion. Isn’t it?

The fate of the men will never been known. What interrupted the person sitting down to eat a warm meal on the boat’s table is the macabre mystery of the Kaz II. Looking as a place where time stood still, the yacht leaves us with the impression that they men met a scientifically impossible fate. The crew of the Kaz II seem to have completely vanished from this world.