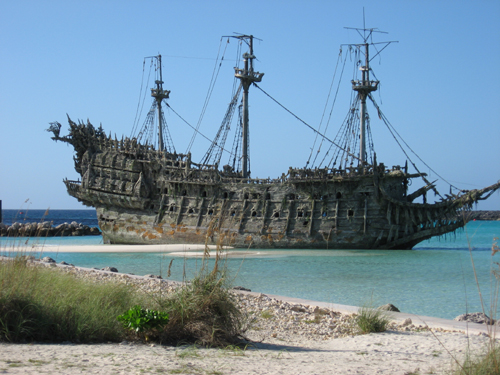 On 11 July 1881 the log of the British Royal Navy vessel Bacchante sailing off the Cape of Good Hope record, “During the middle watch, the Flying Dutchman crossed our bows. She . . . appeared as a strange, red light, as of a ship all aglow, in the midst of which light the masts, spars and sails . . . stood out in strong relief.” The following forenoon, the lookout who first sighted the ghost ship fell to his death. Later the squadron commander suddenly became ill and died.

The Flying Dutchman is a legendary ghost ship that can never make port, doomed to sail the oceans forever. It probably originates from 17th-century nautical folklore. The oldest story can be dated  to the late 18th century.

Sightings in the 19th and 20th centuries reported the ship to be glowing with ghostly light. If hailed by another ship, the crew of the Flying Dutchman will try to send messages to land, or to people long dead.

Purported to be a man-of-war, the Flying Dutchman ship is said to have come across turbulent waters in the South-western African Cape of Good Hope in the mid-1600s. The much recounted folklore and the mystery shrouding the vessel are not for the vessel itself but for the man who skippered the ghost ship.

Accounts vary about the name of the skipper of the Flying Dutchman. According to some, the captain was one Hendrick Van der Decken whose deep contemplation about the plight of his seamen and resultant oblivion to the approaching storm in the coast of the Cape led to the ship being destroyed.

The Dutchman is called the harbinger of death and destruction for those vessels which have sighted it. It has also been retold countless times that letters and missives used to be passed onto those ships that passed the Dutchman in their route. The opening of these letters and missives by the crew resulted in the ships getting destroyed and the crew parting with their lives.

Right from the time the myth emerged in the 1600s; various sightings of the ghost vessel were reported in the Cape of Good Hope. All these sightings happened when the weather was extremely stormy and the gales were lashing hard.

Even German U-boat crews in the Second World War feared the Dutchman, seen east of Suez. Admiral Karl Donitz wrote, “The men said they preferred the strength of the Allied Fleet in the North Atlantic to the terror of a second meeting with the phantom.”

Another story identifies the captain as Bernard Fokke, who was said to have struck a bargain with the devil to reach the Indies in 90 days. For that he was condemned for ever to sail the waters off the southern capes. The captain stood on the deck of the ship, counting off the centuries on his hourglass.

The latest sighting of the vessel was reported in the 1940s by people who gave accurate description of a vessel of the 1600s without having any prior knowledge about the vessels of that era. At present, the oceanic realm seems to be quiet with respect to the sighting of the Dutchman though its allure has not lessened in any manner whatsoever.