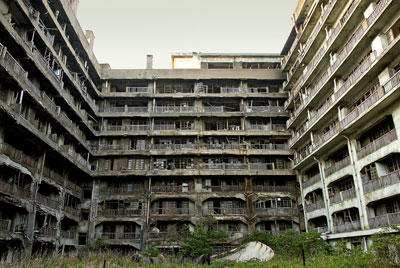 Hashima Island; commonly called Gunkanjima (???; meaning “Battleship Island”) is one among 505 uninhabited islands in the Nagasaki Prefecture about 15 kilometers from Nagasaki itself. The island was populated from 1887 to 1974 as a coal mining facility. The island’s most notable features are the abandoned concrete buildings and the sea wall surrounding it. It has been administered as part of Nagasaki, Nagasaki since 2005.
“Battleship Island” is an English translation of the Japanese nickname for Hashima Island, Gunkanjima (gunkan meaning “battleship”, jima being the rendaku form of shima, meaning “island”). The island’s nickname came from its apparent resemblance to the Japanese battleship Tosa due to its high seawalls. It also is known as the Ghost Island. It is known for its coal mines and their operation during the industrialization of Japan. Mitsubishi bought the island in 1890 and began the project, the aim of which was retrieving coal from the bottom of the sea. They built Japan’s first large concrete building, a block of apartments in 1916 to accommodate their burgeoning ranks of workers (many of whom were forcibly recruited labourers from other parts of Asia), and to protect against typhoon destruction.


In 1959, its population density was 835 people per hectare (83,500 people/km2) for the whole island, or 1,391 per hectare (139,100 people/km2) for the residential district, the highest population density ever recorded worldwide. As petroleum replaced coal in Japan in the 1960s, coal mines began shutting down all over the country, and Hashima’s mines were no exception. Mitsubishi officially announced the closing of the mine in 1974, and today it is empty and bare, which is why it’s called the Ghost Island. Travel to Hashima was re-opened on April 22, 2009 after more than 20 years of closure.