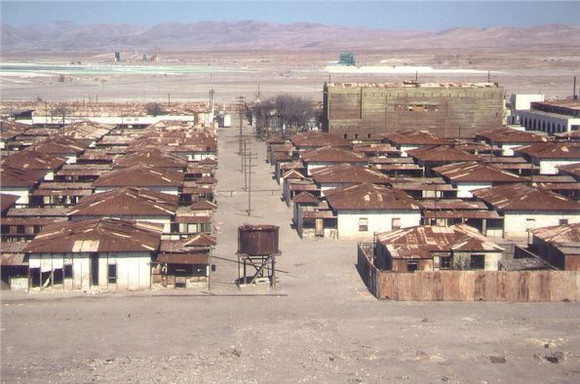 This town was founded in 1862, around a nitrate mine in La Palma, although the name of Humberstone did not come with it’s foundation, but later, in 1925, when it was named after the mine manager who brought prosperity to the settlement. Both Humberstone and Santa Laura, the nearby town, have made the most of the period in which nitrate trade was on great demand.

Founded in 1862 as the nitrate mining center of Oficina La Palma. In 1925, it was renamed Humberstone after the British mine manager who bolstered the small town’s wealth. Both Humberstone and nearby Santa Laura boomed together from their shared nitrate production. The towns saw their heydays as a combined nitrate mining and processing center in the 1930s and ’40s [source: Nuestro]. Nitrate is an essential ingredient in fertilizer, but in the ’30s, a cheap synthetic substitute was create­d, effectively rendering nitrate (also called saltpeter) obsolete.

With the need for mined nitrate diminished, the towns of Humberstone and Santa Laura began to decline alongside the industry they were built on. The towns suffered a slow demise, taking three decades to become completely abandoned. It wasn’t until 1961 that the factory offices (which had continued to support a handful of residents) shut down completely.

The towns were left to sit as they were when the last residents left, the dry sand from the encroaching desert drifting through the abandoned school and the theater. At the factories, the machinery remains and the workers’ houses are around today, although a bit worse for the wear. The Humberstone hotel’s swimming pool is drained now, but its diving board is still in place.

Both Humberstone and Santa Laura will eventually see new life, this time as a vast museum. Although the towns were abandoned, the spirit of the society that lived in them hasn’t been forgotten. In Humberstone and Santa Laura, Chilean unionization gathered new strength, and the towns’ contribution to the development to global agriculture is incalculable. What’s more, the very fact that the townspeople were able to carve an existence from the harsh desert is reason enough to commemorate the towns, as far as the Chilean government is concerned.

In 1970, the government of Chile declared both of the towns as national monuments. And in 2005, they were declared World Heritage Sites by the United Nations Educational, Scientific and Cultural Organization (UNESCO), which should protect the towns from destruction or development and help ensure their future preservation.