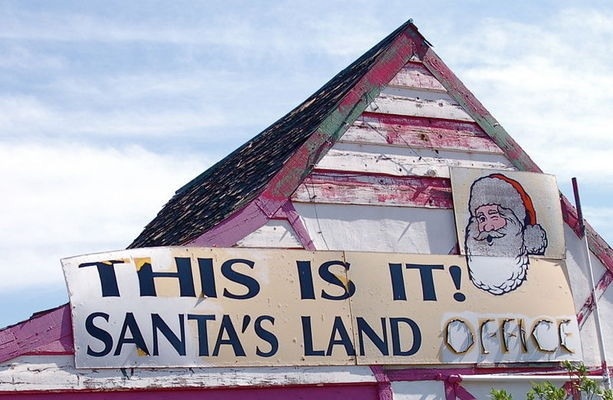 The Mojave desert, with its blisteringly hot summer sun, Joshua trees and bizarre rock formations, would not generally be the place one would choose to honor a man whose traditional home is the North Pole. Yet standing in the desert is the ghost remnants of Santa Claus, Arizona.

Nina Talbot and her husband arrived in nearby Kingman, Arizona, in the early 1930s. Calling herself “the biggest real estate agent in California,” the name originated from Talbot’s girth (over 300 pounds) rather than her business acumen. Nonetheless, she clearly had a flair for public relations.

The Talbot’s founded Santa Claus, Arizona, in 1937 as an attempt to attract buyers to the desert location. It featured several Christmas-themed buildings and visiting children could meet Santa Claus at any day of the year. The town’s post office became very popular in December as children and parents could receive mail postmarked with the town’s name.

The town did in fact become a popular tourist destination, however no one ever bought land there, and the only people living there were the ones working in the town. Failing to see how she would make her real estate profits, and with the town in decline, Talbot sold Santa Claus in 1949, having failed in her attempt to convince people to move to the desert.

One of the places in town that was genuinely successful was its local restaurant, the Santa Claus Inn (later renamed the Christmas Tree Inn). Critic Duncan Hines, who would later become famous for the brand of food products that bears his name, described it as being of the best in the region. In 1950 science fiction writer Robert Heinlein wrote a short story about a sumptuous gourmet meal served there by Mrs. Claus. Gentlemen Prefer Blondes star Jane Russell even threw a dinner there in 1954. But even this was not enough to save the town and by the 1970s, it had already begun to fall into disrepair.

When writer Mark Winegardner visited the area in 1988 for his new book, it had become a sad shadow of its former self with “Styrofoam silver bells, strands of burned-out Christmas lights, and faded plastic likenesses of Old Saint Nick. A lopsided, artificial twenty-foot tree whistled in the wind beside a broken Coke machine and an empty ice freezer. Two of the three buildings were padlocked; through their windows, encrusted with layers of sand and decade-old aerosol snow.”

The last gift shops and amusements went out of business in 1995, leaving little recognizable, except for a few vandalized buildings, a wishing well, and the “Old 1225,” a derailed, pink children’s train covered with graffiti. 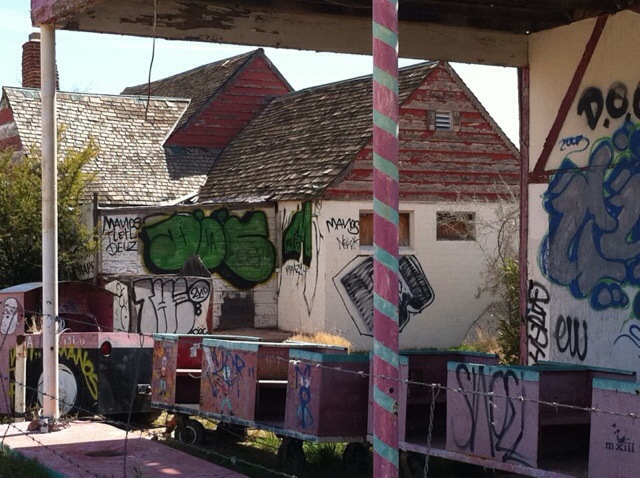