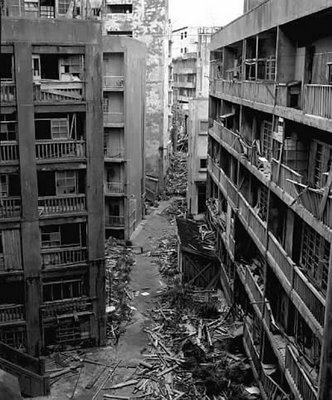 This island is one among 505 uninhabited islands in the Nagasaki Prefecture of Japan about 15 kilometers from Nagasaki itself. It is also known as “Gunkan-jima” or Battleship Island thanks to its high sea walls. It began in 1890 when a company called Mitsubishi bought the island and began a project to retrieve coal from the bottom of the sea. This attracted much attention, and in 1916 they were forced to build Japan’s first large concrete building on the island. A block of apartments that would both accommodate the seas of workers and protect them from hurricanes

In 1959, population had swelled, and boasted a density of 835 people per hectare for the whole island (1,391 per hectare for the residential district) – one of the highest population densities ever recorded worldwide. As petroleum replaced coal in Japan in the 1960’s, coal mines began shutting down all over the country, and Hashima’s mines were no exception. In 1974 Mitsubishi officially announced the closing of the mine, and today it is empty and bare, with travel currently prohibited. The island was the location for the 2003 film ‘Battle Royale II’ and inspired the final level of popular Asian videogame “Killer7”.