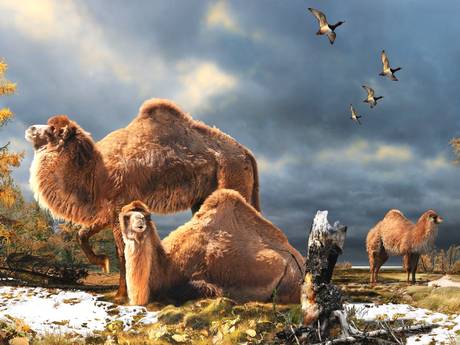 Canadian researchers have discovered the first evidence of an extinct giant camel in the High Arctic. A 3.5 million-year-old fossil was unearthed on Ellesmere Island, the most northerly part of Canada, which faces the Arctic Ocean.

The finding extends the previous known range of camels in North America northwards by about 750 miles, and suggests the lineage that gave rise to modern camels may have been originally adapted to living in an Arctic forest environment. It was initially unclear which species the bone came from, so the researchers, led by Dr Natalia Rybczynski, a vertebrate paleontologist with the Canadian Museum of Nature, enlisted the help of Mike Buckley from the Manchester Institute of Biotechnology.

Dr Buckley used the “collagen fingerprinting” technique to identify the animal. He extracted collagen from the bone fragment to create a profile. He then compared the profile to 37 modern mammal species, as well as that of a fossil camel found in the Yukon. He discovered the collagen profile for the High Arctic camel was almost an identical match to the modern dromedary as well as the Ice-Age Yukon camel.

The data, combined with the anatomical data, revealed the fragments belonged to a giant camel as the bone was 30 per cent larger than the same bone in a living camel species. “This is the first time that collagen has been extracted and used to identify a species from such ancient bone fragments,” Dr. Buckley said.

The fragments were collected from Fyles Leaf Bed on Ellesmere Island.