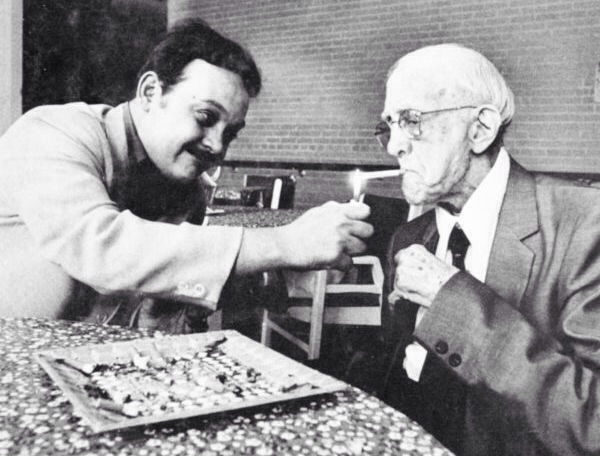 Joseph “Yellow Kid” Weil (July 1, 1875 – February 1976) was one of the most famous American confidence men of his era. Weil’s biographer, W.T. Brannon, believed Weil had an “uncanny knowledge of human nature.” Over the course of his career, Weil is said to have stolen over eight million dollars through cons.

Weil was born in Chicago to Mr. and Mrs. Otto Weil. When Weil was seventeen, he left school and started working as a collector. Weil, noticing that his co-workers were keeping small sums for themselves, organized a protection racket: Weil wouldn’t tell for a share of his co-workers’ dough. Under the tutelage of Chicago confidence man Doc Meriwether, Weil started performing short cons in the 1890s at public sales of Doc Meriwether’s Elixir, the chief ingredient of which was rainwater.

The Yellow Kid was the most famous con man of the early twentieth century. Chicago was his stomping ground, and his every deed was reported by the daily papers, who treasured his elegant clothes almost as much as his racy exploits. He ran the big con, giving solid, self-made businessmen the opportunity to ratchet up their wealth with an inside track to the world of high finance. His cons regularly netted him $25,000-$50,000 at a time. In the late 1920s, he swindled Mussolini out of $2 million. It is rumored that he stole over $8 million in his long life, though he reformed his dastardly ways in the late 1940s and published his tell-all memoir to great acclaim.

The nickname “Yellow Kid” first was applied in 1903 and came from the comic “Hogan’s Alley and the Yellow Kid.” After working for some time with a grifter named Frank Hogan, Chicago Alderman “Bathhouse John” Coughlin associated the pair with the comic: Hogan was Hogan, and Weil became the Yellow Kid. “There have been many erroneous stories published about how I acquired this cognomen,” Weil writes in his biography. “It was said that it was due to my having worn yellow chamois gloves, yellow vests, yellow spats, and a yellow beard. All this was untrue. I had never affected such wearing apparel and I had no beard.”

Weil donned gentleman’s garb and artfully flimflammed hundreds of marks, including horseplayers who fell for his phoney wiretap schemes for beating the odds, lovers of exotic pets who bought his talking dogs only to learn that they had been “stricken” with laryngitis, and one detective who was finessed into buying $30,000 in “stock” from convicted Swindler Weil while escorting him to prison… “Each of my victims had larceny in his heart,” explained the master of hanky-panky.

“The desire to get something for nothing has been very costly to many people who have dealt with me and with other con men,” Weil writes. “But I have found that this is the way it works. The average person, in my estimation, is ninety-nine per cent animal and one per cent human. The ninety-nine per cent that is animal causes very little trouble. But the one per cent that is human causes all our woes. When people learn — as I doubt they will — that they can’t get something for nothing, crime will diminish and we shall live in greater harmony.”