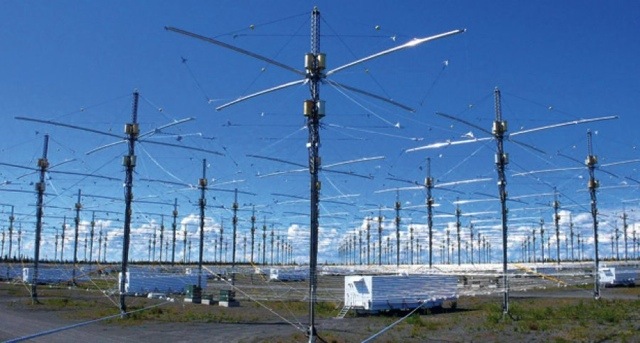 In an Arctic compound 200 miles east of Anchorage, Alaska, the Pentagon has erected a powerful transmitter designed to beam more than a gigawatt of energy into the upper reaches of the atmosphere. Known as Project HAARP (High-frequency Active Auroral Research Program), the $30 million experiment involves the world’s largest “ionospheric heater,” a prototype device designed to zap the skies hundreds of miles above the earth with high-frequency radio waves.

The theory suggest that the transmitter can control the weather! Yes full on climate control or is a giant weapon….

These low frequencies improve radio contact between people, even if you’re inside a thick concrete bunker or a submarine. The military might be able to prank call the korean subs with ease, locate missiles and detect bunkers created by the ‘enemy’ but I highly doubt this is worth paralyzing anyone who is between the wave and the wave’s destination. That’s like them firing missiles at each other with you being completely immobile in between them.

They claim scientists intend to heat the ionosphere with the antennas, in turn this will create ion clouds that will replicate an optical lense, which will reflect ELF waves and rain shit down upon us. They can be aimed at anywhere at all, depending on where the waves are going.