Home Modern Mysteries Has the $400million Amber Room stolen by the NAZI’s been found?
UNEXPLAINED MYSTERIES 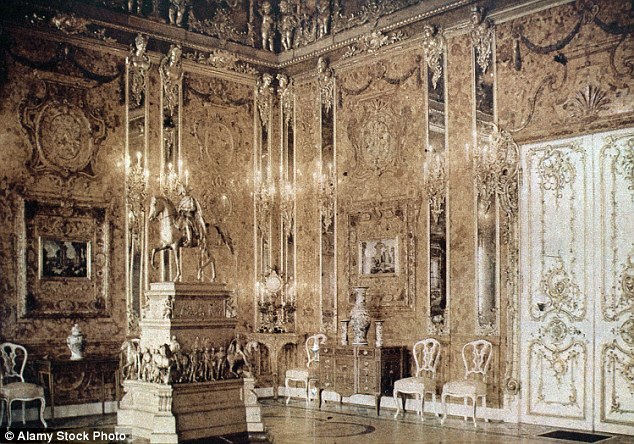 Missing: The Amber Room was completed at Catherine Palace in 1770, but was stolen by the Nazis in 1941. It was taken to Koenigsberg Castle, in what was then in East Prussia, but disappeared in January 1945. The castle is now found in the city of Kaliningrad. It is believed the Nazis’ chief administrator in East Prussia, Erich Koch, transported the Amber Room from the city of Koenigsberg (now Kaliningrad) to Wuppertal in west Germany. However, Mamerki museum staff say they have found a hidden, walled off room which they believe could contain the remains of the Amber Room

Shortly after the beginning of the German invasion of the Soviet Union in World War II, the curators responsible for removing the art treasures in Leningrad tried to disassemble and remove the Amber Room. However, over the years the amber had dried out and became brittle, making it impossible to move the room without crumbling the amber.

The Amber Room was therefore hidden behind mundane wallpaper, in an attempt to keep German forces from seizing it. Predictably, the attempt to hide such a well-known piece of art failed

Is 60-year hunt for the missing $400million Amber Room FINALLY over? New images show Nazi looted treasure may be hidden behind sealed wall in a secret room of an underground bunker in Poland

The search for a one of the greatest missing treasures of the Second World War – an Amber Room worth £250million – has taken a fresh twist as treasure hunters say it may be in a secret room in a Polish museum.

The room, built for Russian tsar Peter the Great in the 1700s and packed with amber, gold and precious jewels, was stolen by the Nazis and mysteriously disappeared at the end of the Second World War.

For decades, hunters have scoured Europe searching for the missing treasure to no avail.

But now, bosses at the Mamerki museum near Wegorzewo, north east Poland, say it may have been hidden behind a false wall that was sealed shut inside an old wartime bunker – after finding an unknown room measuring 6.5ft wide and 10ft long using geo-radar.

After the trucks had been emptied, the room they had been placed in was sealed. It is thought parts of the Amber Room were stored in the bunker complex for later transportation.

But it disappeared in January 1945, after air raids and a savage ground assault on the city.

While some claimed it had been destroyed in the raids, others reported seeing 40 wagons moving away from the castle under a cloak of secrecy after the city fell to the Red Army.

In the 1950s, Erich Koch, the Nazis’ chief administrator in East Prussia who is believed to have overseen the Amber Room’s transportation from the city of Koenigsberg to Wuppertal in Germany, was taken from prison to the museum site to show Polish officials where the room was.

Throughout the the next two decades, Polish bomb squads searched the bunkers for evidence of the hidden room.

Mystery of the Amber Room

1. the statement of the inspector of the castle, Mr. Henkensiefken. He wrote a diary where it says that the Amber Room had been removed and packed after a fire in the castle in February 1944. It has been brought to the cellars where he saw it undamaged after the destruction of the castle in August 1944 when he had to write a report about the castles condition.

2. Eye witness Professor Dr. Gerhard Strauss, art historian in castle Königsberg. Professor Strauss wrote in the magazin “Freie Welt”: “I came to the castle on the second day after the bomb attack of August 29, 1944 and met Dr. Rohde. He told me that the Amber Room in the cellars would have survived the attack. It was standing in boxes outside and Dr. Rohde just wanted to evacuate it to some rooms in the northern part of the castle”.

3. Mrs. Amm would have never asked Dr. Rhode at first: “What happened to the Amber Room?” After the heavy bomb attack, she would have asked for the health of the family and her friend for sure.

4. Alfred Rhodes own statements. There were some letters left by him from the time of September 1944 until January 1945. In a letter of Dr. Rhode from September 2, 1944 he wrote: “please tell Director Mr. Gall that the Amber Room has not been damaged, except six socket parts.”

5. Amber is “gasoline”. The resin burns with large flames already at low temperature and leaves only coal. It would never leave a “honey-like substance”. Without a doubt, Dr. Rhode had lied to Mrs. Amm. When the ruins of the castle had been examined, one neither found the Amber Room, nor the smallest piece of it…nor even the iron parts, which do not burn…

The Amber Room, Amber parts or iron parts holding some elements together, never have been found during the investigation… the Amber Room did not burn. It was last seen in spring of 1944 in Königsberg or still was there in the beginning of September 1944, if the letters of Dr. Rhodes count as evidence. Since this time, the trace has been lost …..