Hatton Garden robbers left ‘hundreds’ of items including gold bars, diamonds and jewels behind on vault floor. Police suspect they may have been hunting for one specific mysterious object.

One victim, a gold dealer, has now also stated the six suspects were hunting for something specific – and that the robbery appears very strange particularly as only 72 of the 999 boxes were opened despite the thieves having plenty of time to carry out the raid over the Easter weekend.

The exact number of items strewn across the floor is unclear, with another victim claiming he had been told by police that only half a dozen items had been found and yet another victim saying it was hundreds, according to the Times.

WHEN DID THE HEIST HAPPEN?

Thursday, April 2: Workers from businesses in the building go home for long Easter weekend. Some have claimed the thieves were already hiding inside the building waiting to be locked in.

Friday, April 3: Police have found no signs of forced entry at the premises, but an intruder alarm sounded at the safety deposit business in the basement at 00:21. No police car was sent. Traders have claimed a security guard attended the site but said he ‘wasn’t paid enough’ to look inside the vaults.

Saturday, April 4, Sunday April 5 and Monday, April 6: The exact time of the raid has not been confirmed, but given the amount of time it would have taken to drill through the concrete wall and opened 72 safety deposit boxes, it is thought to have taken many hours.

Tuesday, April 7: At 8am, workers return to the building and finding ‘scenes of chaos’. They call the police, who attend. 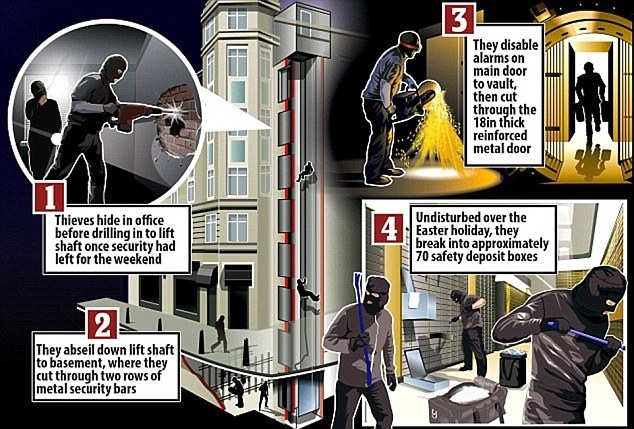 Dramatic images which revealed the daring methods used by thieves during the £60m Hatton Garden heist in central London were released by police last month.

They showed the gaping 50-cm deep hole which the suspects carefully drilled into the vault’s concrete wall so they could access the goldmine of gems.

Scotland Yard also described how there was rubbish covering the Hatton Garden basement, while the wrought-iron cage door had been broken down. An angle grinder, concrete drills and crowbars were found amid the security boxes.

Officers in London said there was no sign of forced entry to the outside of the building, indicating that the thieves had a key or that someone had let them in from the inside.

The gang then appeared to have disabled the communal lift on the second floor, before using the lift shaft – which was also destroyed when police officers arrived at the scene – to climb down into the basement.

They then opened shutter doors into the basement, before boring holes into the vault wall. 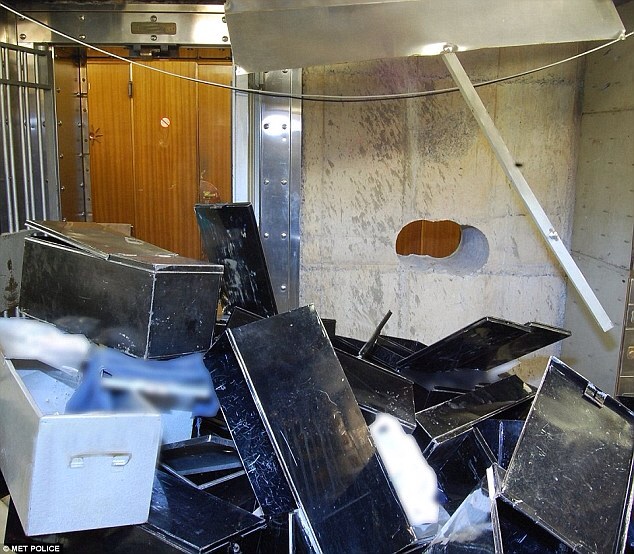