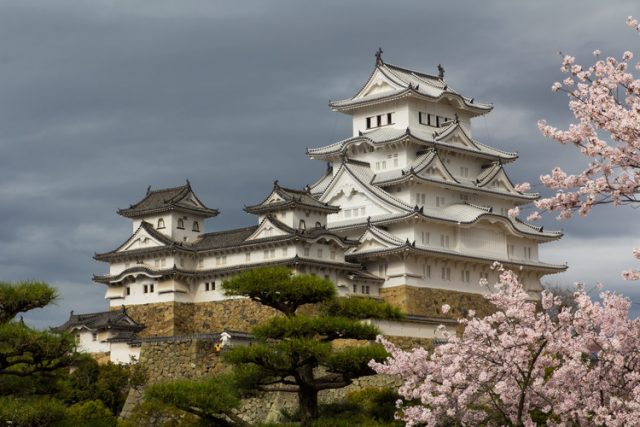 Himeji Castle is the largest castle in Japan and is allegedly the location for one of Japan’s most famous ghost stories.

A young, beautiful lady named Okiku was blamed for the loss of a plate – one from a set of ten, a valuable family treasure.
Okiku counted the plates again and again but could only find nine.

The penalty was death.

Okiku was suspended over a well on the castles grounds, beaten, lowered in and submerged to near drowning before being taken out again…. to have the torture repeated until she was eventually killed.

Her body was thrown into the well and then covered.

Okiku has since been seen to appear at the well, count to nine, then cry out in anger, fear and frustration before disappearing again.

It is said you can end Okiku’s suffering, but just for a while, if you say ‘ten’ after she counts to nine… the plates all accounted for she can rest peacefully… for a while until she next appears to repeat her task.

After that night, however, every night Okiku’s ghost would appear (or Yuurimi, as the Japanese describe this type of ghost – a Yuurimi is the spirit of someone who died in sudden or rash circumstances, charactarised by pitch black hair, a white dress, and dismembered, or missing, hands and feet). Okiku’s Yuurimi would climb out of the well, walk into the Mansion of Plates, and check on the plates. The ghost would count the plates, and upon reaching nine and not findng ten, the ghost would wail unnaturally.

This phenomenon continued, and Tessan Aoyama knew that he should probably put the plate back in order to appease the ghost. But still convinced that he’d have the last laugh, he refused. And so every night, the Yuurimi would continue this ritual, and this eventualy drove Tessan to insanity. He was thrown out of the castle, which ironically saved the castle’s master from Tessan’s assassination attempt.

This story has became one of the best known Japanese plays ever, it has many variations. although this version is widely accepted as the most accurate. The haunting of Okiku’s ghost continues to this day, though not as frequent and not as persistant as it originally was. The well where Okiku drowned is known as ‘Okiku’s Well’

(There is also another part where when the mistress blames Okiku she was beaten and executed then thrown down the well.)

Okiku’s story has been turned into a number of famous plays and has formed the basis for many similar stories, as such you may hear a different telling at times but the poor girls fate is always the same, her life is ended at this well.