Strange lights and moving shadows have been seen on the moon by astronomers so often that NASA has even published a catalog of them. From the year 1540 to 1967, NASA lists over 570 strange moon events in a report called “Chronological Catalogue of Reported Lunar Events.” The report is also known as NASA Technical Report # R-277.

Lights on the moon were being seen so regularly that NASA started a study, called Operation Moonblink, to investigate them. NASA commissioned observatories from around the world to just watch and photograph the moon. Within months there were more than twenty-eight documented lunar events. Several of these events were confirmed by astronomers outside the program. Photographs of these events have never been released to the public. Why?

All Around the World

It turns out that the 570 “lunar lights” events cataloged by NASA are just a few of literally thousands of such observations that are regularly being made around the world by amateur astronomers. In fact, NASA took these 570 events from over 2,600 such events they had observed. In countries such as Japan and Great Britain, where astronomy is a national passion, these lunar activities have been well documented on film as well as still photographs. Huge objects, four to five miles in diameter have been seen moving across vast lunar craters at speeds up to 6,000 miles per hour! In addition, beams and long-distance rays of light have also been seen, as well as clouds, fog, and mists. All these anomalies on the moon have been cataloged for decades by credible scientists.

Moongate: Suppressed Findings of the U.S. Space Program, published in 1982, detailed a NASA film taken by astronauts on the moon that the author was able to get his hands on. It shows Apollo 11 astronauts planting the American Flag on the moon. Immediately after, a gust of wind blows the flag and it billows out. The astronauts run towards the camera and cover the lens with their hands. From then on, all flags sent up with the astronauts had wires in them to hold them out.

How Was the Moon Created?

Music on the moon?

Basically, nobody knows how the moon was created; however, there are two main schools of thought:

One is the Big Whack theory. It says that something, maybe an asteroid, hit the earth millions of years ago, leaving a cloud of debris. The particles were eventually drawn together and formed the moon.

The other theory is that the moon broke off from the earth when it was a molten mass spinning rapidly, so rapidly that it formed a dumbbell shape and one end broke off. This theory was originally proposed in 1880 by Sir George Darwin, the son of famed evolutionist Charles Darwin.

The important thing is this, all modern theories of how the moon was formed are based on the premise that at one time the earth and the moon were one.

Here’s what your eight grade science teacher didn’t tell you. (It’s not her fault; she didn’t know either!) When the astronauts landed on the moon and brought back moon rocks in 1969, scientists scrutinized them carefully. They were shocked by what they discovered. Here’s what they should have told you but didn’t:

* The moon rocks are over a billion years older than our earth!

* The moon dust is a billion years older than the rocks!

* Both the rocks and moon dust the astronauts brought back are older than our sun and our entire solar system!

* Chemical analysis showed that the composition of the moon rocks and moon dust was completely different, not even closely related to one another as would be expected.

What this means is that it appears as if the moon was created somewhere else and someplace else! Also, it means that the moon rocks somehow got placed on the surface from somewhere else a billion years after the dust had formed.

That’s just the start. The moon’s orbit is nearly a perfect circle. Not only that, but the moon does not spin. One side, the same side, is always facing the earth.

Scientists have not found any other naturally occurring body in the entire universe that exhibits these two characteristics. The only objects I know of that do this are the satellites we launch. The moon behaves exactly like a satellite! The odds against the moon falling naturally into this kind of circular, non-spinning orbit are astronomical! No pun intended.

Ultrasensitive seismic equipment has been placed on the moon by the astronauts. When Apollo 12 and Apollo 13 left the moon, they jettisoned the ascent stages of their spacecraft. The pieces of the craft fell back and hit the moon. Despite the relatively small size of these objects, when they struck, the entire moon reverberated for over eight minutes! The moon registered as being more hollow than full! Scientists at NASA said, “It reacted like a gong!” They are at a loss to explain this, and so they avoid discussing it with the public.

According to Soviet Col. Marina Popovich, Russian scientists have concluded that Phobos, one of the moons of Mars, is also an artificial structure, and hollow, as well!

The Shard is an object that was photographed by Orbiter 3, a United States spacecraft that was launched before the Apollo space missions took place. It is a monument and it is a mile and a half high! World-renowned geologists agree with Dr. Bruce Cornet, who says: “No known natural process can explain such a structure.”

The Shard is a huge and very distinctive feature. No astronomer or scientist denies its existence. Isn’t it odd that you never heard of it before? According to Dr. Farouck El Baz, there are many undiscovered caverns suspected to exist beneath the surface of the moon. Several experiments have been flown to the moon to see if there were actually such caverns. The public has never been given the results of these experiments. 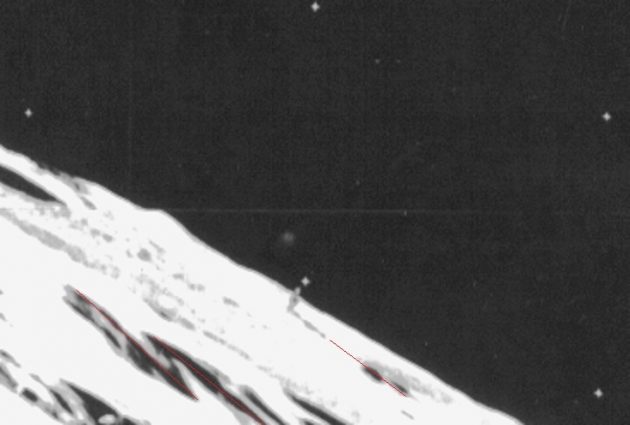 The Tower is another major structure on moon that has been photographed from different altitudes and five different angles. The Tower is five miles high! Standing close to The Shard, The Tower is comprised of cubes, some as large as a mile wide. These two monuments were built by someone, they did not occur naturally. NASA has clear photographs of these two monuments. These photos belong to you; you paid for them, but NASA has never shown them to the public.

More about the moon

Did a bit off the moon break off?

Strange Mysteries of the Moon

Is the Moon hollow?

The problem with the moon!