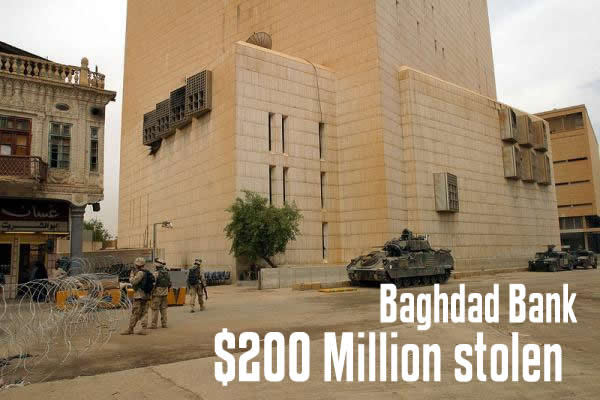 The most incredible robbery of all time took place in Baghdad the day before the US began bombing the city prior to the invasion of 2003. Saddam Hussein was determined to rescue as much as he could for himself and his family, ignoring everyone else.

He gave his son Qusay a note for $950 million, which Qusay then proceeded to take in cash form from the bank vaults and load into trucks. The bank manager confirmed that over a billion dollars was removed that day. Whilst much of it was recovered from the walls in Saddam’s palace, both Saddam and son Qusay are now no more, and so have taken to their graves the secret of $350 million that to this day is still unaccounted for. The biggest bank job of all time, and the perpetrators got away with it.

In March 2003, just hours before the U.S. bombing campaign in Iraq began, Saddam Hussein and members of his family took an estimated $1 billion in cash from Iraq’s Central Bank.

In that incident, Hussein’s sons and other high-ranking government officials essentially abducted bank managers, forced them to open vaults, and then drove off with the money in three trucks.

At various times throughout the war, military officials have announced the finding and seizure of huge amounts of cash and gold. Much of the money has been tied to financing the insurgency.

The robbing of banks to fund militant organizations is not new. Irish Republican Army gunmen are alleged to have stolen millions from Irish and British banks, and in 1976, the Palestinian Liberation Organization robbed some $600 million in cash and other valuables from a British bank in Lebanon.