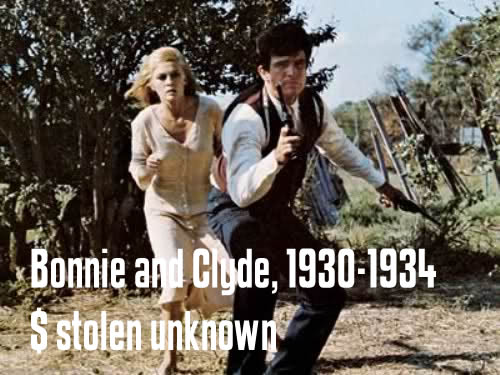 Arguably the most famous (and infamous) bank robbers in history, there is no definitive tally of exactly how much Bonnie Parker and Clyde Barrow stole. What we do know is that, in the words of the FBI, the Barrow gang carried out a “violent crime spree across the Midwest that included auto theft, bank robbery, theft from the federal government, and the murder of more than a dozen people, including many law enforcement officers.” Following a string of bank, gas station, and convenience store robberies that inspired a hit 1967 film about the duo, Bonnie and Clyde were famously gunned down by police officers in a planned ambush in Louisiana on May 23 1934, described by the FBI as “one of the most colorful and spectacular manhunts the nation has seen.”