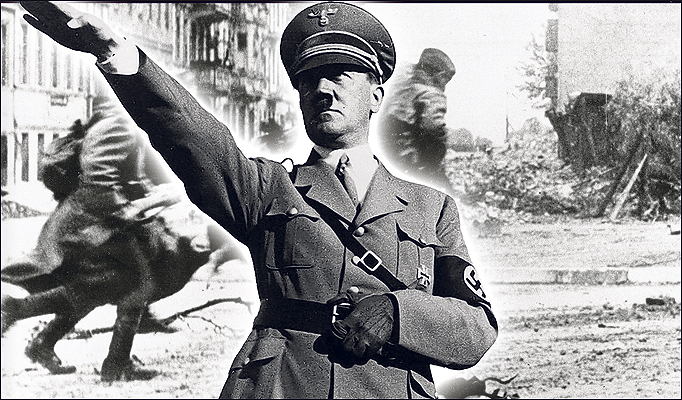 THE game was up. The war was lost. Their leader had killed himself.

So why would Adolf Hitler’s aides have gone to such lengths and risked their  lives to take his body and that of Eva Braun out of his bunker, under fire  from Soviet artillery, and try to burn them beyond recognition?

It is a sinister thought but conspiracy theorists all over the world will be  asking once more: Did Hitler really die in his bunker?

Historians have generally agreed since the end of the Second World War that,  staring defeat in the face, an increasingly feeble and paranoid Hitler had  married Eva Braun in the bowels of his Berlin bunker after midnight on April  29, 1945, and later dictated his will.

His physician Werner Haase, in response to Hitler’s questions, had recommended  a dose of cyanide and a gunshot to the head as the most reliable form of  suicide.

Hitler, convinced of the treason of SS leader Heinrich Himmler, doubted the  reliability of the SS-supplied cyanide tablets and had one tested on his dog  Blondi, after which the dog died.

Following lunch on April 30, with Soviet forces less than 500 metres from the  bunker, Hitler and Eva said goodbye to staff and fellow occupants, including  the Goebbels family, private secretary Martin Bormann and military officers.

They went into Hitler’s personal study at 2.30pm and at around 3.30pm some  witnesses reported hearing a loud gunshot.

Those, including valet Heinz Linge, who went into the study reported the smell  of almonds, consistent with cyanide gas.

They said they saw Hitler slumped on his desk with a bullet wound to his head,  a pistol on the floor and blood pooling on the arm of the sofa on which Eva  lay beside him with no visible sign of injury.

Several witnesses said the bodies were then carried up to the emergency exit  and into a small bombed-out garden behind the Chancellery where they were  doused with petrol and set alight, then buried in a small crater when the  Soviet shelling made it unsafe for the cremation to continue.

Seven and a half hours later, Red Army troops began storming the Chancellery  and the remains of Hitler, his wife and two of his dogs were said to have  been discovered in a shell crater by a Soviet soldier.

But were they? The Soviet story changed regularly in the aftermath of the fall  of Berlin and in the following years. Conspiracy theorists point to  suggestions that:

Death by cyanide and gunshot? … Adolf Hitler at Berghof

Joseph Stalin told Western leaders at the Potsdam conference in 1945 he  believed Hitler may have escaped to Spain or South America.

Stalin’s top army officer, Marshal Georgy Zhukov, said: “We found no corpse  that could be Hitler’s.”

The acting chief of the US trial counsel at Nuremberg, Thomas J Dodd, said: “No one can say he is dead.” The most convincing evidence of Hitler’s  suicide came from the testimonies of those who were in the bunker — but they  did not all agree on the details.

Hitler’s bodygyuard Rochus Misch, the only survivor of the bunker still alive,  told this year how he heard someone shout to Hitler’s valet, “Linge, Linge,  I think it’s happened.”

“They’d heard a gunshot, but I hadn’t. I saw Hitler slumped  by the table. I did not see any blood on his head.”

After the bodies were carried upstairs, Misch said: “Someone shouted to me, ‘Hurry upstairs, they’re burning the boss!’ ”

But Misch decided not to go, in case the “last witnesses” were shot.

He was later captured after fleeing the bunker and spent eight years in Soviet  prison camps.

Details of a Soviet autopsy on the remains they found, released years later,  apparently showed gunshot wounds and cyanide poisoning.

The remains were repeatedly buried and exhumed by Russian agents during their  relocation from Berlin to a new facility at Magdeburg. There, they were put  in an unmarked grave with the bodies of propaganda minister Joseph Goebbels,  his wife and their six children.

When the facility was due to be handed over to the East German government in  1970, the KGB, it is said, exhumed all ten bodies, burned them and threw the  ashes in the river Elbe to prevent the area becoming a Nazi shrine.

They kept Hitler’s jaw and part of his skull — the fragment now thrown into  doubt by US archaeologist Nick Bellantoni, who was given permission to  examine the artefacts in the Russian state archive.

Other discrepancies which have muddied the waters include a photo released by  Soviets at the time of the fall of Berlin which purported to be the body of  Hitler, shot in the forehead. It is now thought to be one of Hitler’s body  doubles.

Others who believe he escaped subscribe to a variety of conspiracy theories.  The most popular include one or more of these elements:

Hitler and Eva Braun escaped from the bunker on April 22, 1945, leaving behind  doubles who killed themselves or were murdered.

They were flown to Norway where German subs were waiting to transport them  away from Europe.

They were helped by the Vatican to escape to Spain then Argentina.

Two German submarines seized by Argentina after the war had delivered Hitler  to a secret Nazi base in the heart of Antarctica.

The Falklands War was fought by Britain not to protect the islanders but the  secret that British authorities knew about the Nazi base in nearby  Antarctica.

Hitler thrived in a community of Germans in Argentina where he went under the  alias of priest Father Krespi. When ‘Krespi’ died in 1993, Germans from all  over the world flew in for the funeral.

Using rocket technology, the Nazis sent Hitler to a secret base on the moon.  Not all of the theories are so far-fetched.

In the book Hitler’s Escape, by Ron T Hansig, the author argues that the Nazi  leader may have made his getaway to Spain.

It claims that Gestapo chief Heinrich Muller told his American interrogators  in 1948 that he had arranged Hitler’s escape and that the German leader and  Eva Braun flew to Barcelona on April 26, 1945.

So did Hitler survive? Were the details of his death deliberately muddled by  the Soviets?