Home Science How the moon was formed
UNEXPLAINED MYSTERIES 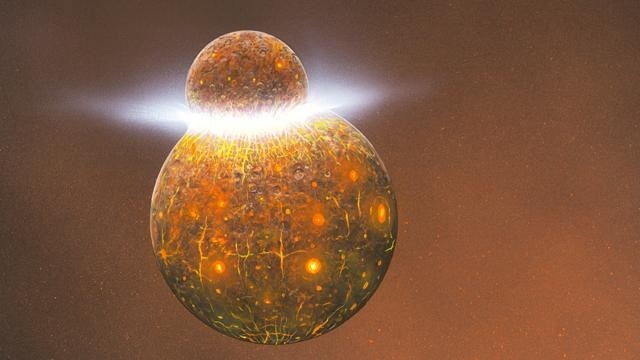 The giant impact hypothesis states that the Moon was formed out of the debris left over from a collision between the Earth and a body the size of Mars, approximately 4.5 Gya (four and a half billion years ago). The colliding body is sometimes called Theia, for the mythical Greek Titan who was the mother of Selene, the goddess of the Moon.

The giant impact hypothesis is the currently-favoured scientific hypothesis for the formation of the Moon. Supporting evidence includes: the identical direction of the Earth’s spin and the Moon’s orbit, Moon samples indicating the surface of the Moon was once molten, the Moon’s relatively small iron core, lower density compared to the Earth, evidence of similar collisions in other star systems (that result in debris disks), and that giant collisions are consistent with the leading theories of the formation of the solar system. Finally, the stable isotope ratios of lunar and terrestrial rock are identical, implying a common origin.

There remain several questions concerning the best current models of the giant impact hypothesis, however. The energy of such a giant impact is predicted to heat Earth to produce a global ‘ocean’ of magma; yet there is no evidence of the resultant planetary differentiation of the heavier material sinking into Earth’s mantle. At present, there is no self-consistent model that starts with the giant impact event and follows the evolution of the debris into a single moon. Other remaining questions include when the Moon lost its share of volatile elements and why Venus, which also experienced giant impacts during its formation, does not host a similar moon.