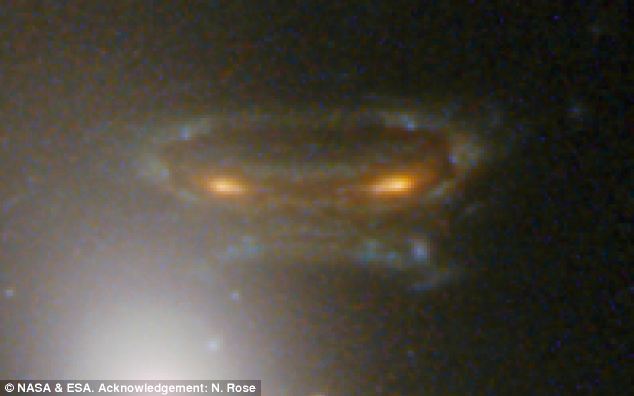 Is ET playing a JOKE on us earthlings ?

So it may look like an attacker from a 1980s computer game, but Nasa today revealed this photo taken by Hubble of a massive cluster of galaxies two billion light years from Earth is an optical illusion.

Called Abell 68, the object is really a mirage created by the gravitational field of a foreground cluster of galaxies warping space and distorting the background images of more distant galaxies.

This effect, called gravitational lensing, can make multiple mirror image copies of the light coming from a far-flung galaxy.

The gravitational field surrounding this massive cluster of galaxies, Abell 68, acts as a natural lens in space to brighten and magnify the light coming from very distant background galaxies,’ said Nasa.

‘Like a fun house mirror, lensing creates a fantasy landscape of arc-like images and mirror images of background galaxies.’

The foreground cluster is two billion light-years away, and the lensed images come from galaxies far behind it.

‘In this photo, the image of a spiral galaxy at upper left has been stretched and mirrored into a shape similar to that of a simulated alien from the classic 1970s computer game Space Invaders!’