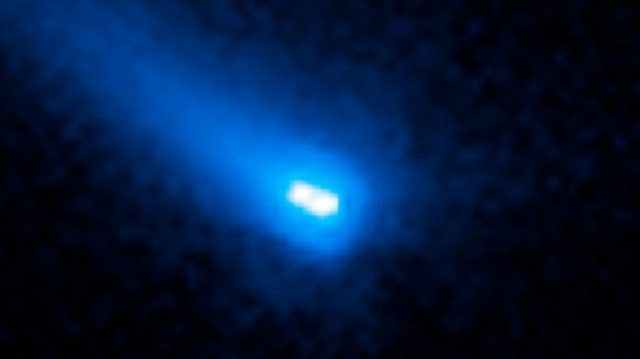 The Hubble space telescope has unravelled the mystery of a strange asteroid which had also been classified as a comet – and which had puzzled astronomers.

Hubble was used to image the asteroid, designated 2006 VW139, in September 2016 – and the image revealed that it’s not one, but two asteroids.

The two rocks are orbiting each other at a distance of 60 miles – and behave very weirdly, the researchers say.

We detected strong indications for the sublimation of water ice due to the increased solar heating, similar to how the tail of a comet is created,’ said m leader Jessica Agarwal of the Max Planck Institute for Solar System Research, Germany.

The features of the binary asteroid – such as its comet-like activity, and the fact that the two parts are the same size – make it unique.

Understanding its origin and evolution may provide new insights into the early days of the solar system.

Main-belt comets may help to answer how water came to a bone-dry Earth billions of years ago.

Argawal said, ‘We need more theoretical and observational work, as well as more objects similar to this object, to find an answer to this question.’