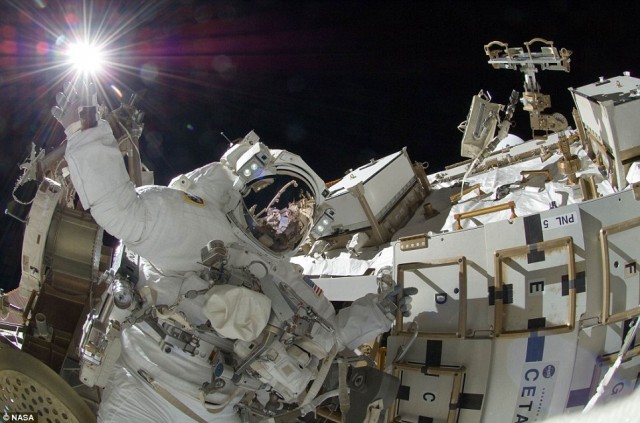 these amazing pictures were taken during the six-hour, 28-minute spacewalk, Williams and Japan Aerospace Exploration Agency astronaut Aki Hoshide (visible in the reflections of Williams’ helmet visor), flight engineer, completed the installation of a Main Bus Switching Unit (MBSU) that was hampered by a possible misalignment and damaged threads where a bolt must be placed.

They also installed a camera on the International Space Station’s robotic arm, Canadarm2.

Earlier in the spacewalk, the two astronauts resorted to MacGyver like moves to save the $100 billion International Space Station with a $3 toothbrush.

Their ingenuity allowed for the installation of a much needed part on the space station, needed to relay power.

Trouble on the spacecraft started last week, when Williams and Hoshide were trying to replace a malfunctioning electrical unit, called a main bus switching unit (MBSU), on the space station.

There are four 220-pound MBSUs on the International Space Station that are able to harness power from the outpost’s solar arrays.

But with one of the electrical units not operating, there had been limited power use in the space station and astronauts were called on to replace it with a new one.

Williams and Hoshide had been working to install a new MBSU back on August 30 but encountered difficulty in bolting the new unit down to the spacecraft.

It appeared that there was significant debris, described as metal shavings, that had amassed inside the bolts and was preventing them from attaching it to the space craft and securing the MBSU.

Hoshide was able to maneuver a wire cleaner around one of the bolt holders, that loosed a lot of metal shavings but it just wasn’t enough, he told the NASA team back in Houston. 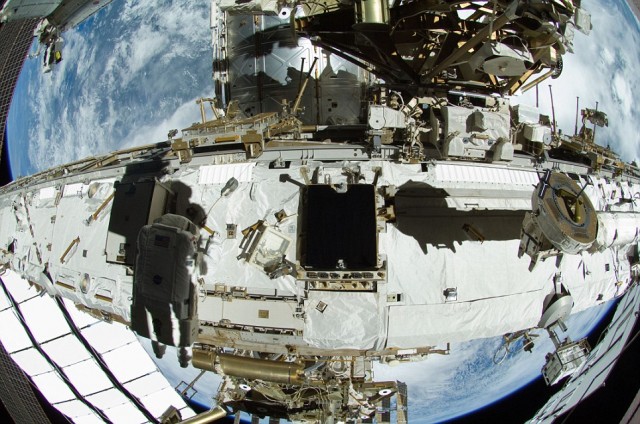