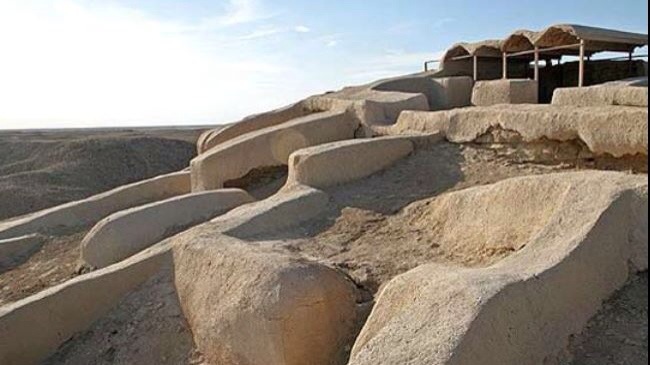 The skeleton of 45-year-old man was found in the center of the circle-shaped grave and skulls of two dogs were also placed above his head. In addition, 12 human skulls were located on the north side of the grave, said the director of archaeological team Seyyed Mansour Sajjadi.

From 1200 graves, which have been discovered in the Burnt City since 1975 during various archaeological excavations, the newly found burials have their unique style.

“The grave may date back to a period before the advent of Zoroastrianism or it may belong to the people who were living in the region before the Iranian people settled in the area,” the project archaeologists say.

The United Nations Educational, Scientific and Cultural Organization (UNESCO) registered Iran’s Burnt City as a new Iranian entry on its World Heritage List during its 38th session held in June 2014.

Located near Zabol in the southeastern province of Sistan-Baluchestan, Burnt city is one of the largest and richest Bronze Age sites in Iran and the Middle East.

The ancient city is believed by some to have been the capital of an ancient civilization that flourished on the banks of the Helmand River nearly 5200 years ago.

Spanning more than 300,000 hectares, the site had extensive commercial, political, and social relations with other important cities in the region’s northeastern and western areas.

Four civilizations have lived in the city which was burnt down three times and not rebuilt after the last fire.

The world’s oldest animated picture, a dice and backgammon set, and the earliest known caraway are among the most significant discoveries at the site.

Despite the excavations and studies carried out at the site, the reasons for the unexpected rise and fall of the Burnt City still seem to remain a mystery.

Burnt City was excavated for the first time by the Istituto Italiano per l’Africa e l’Oriente (IsIAO) team led by Maurizio Tosi in 1967. The team conducted nine seasons of excavations until 1978.

The reputed Italian archaeobotanist professor Lorenzo Costantini also traveled to Iran in 2005 and along with three teams of archeobotanists studied the site and excavated the area.

They found that residents of the Burnt City had great skills in weaving tissues, creating fine arts such as decorative objects, stone carving, and painting their pottery.