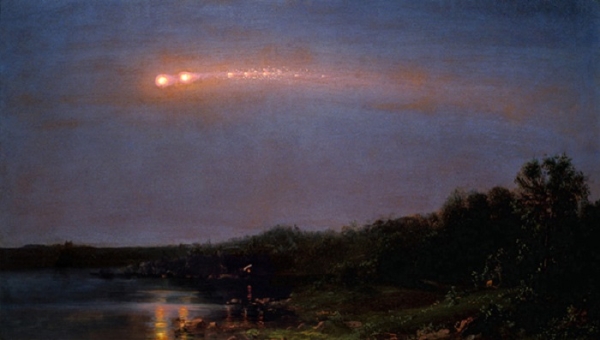 Hundreds of people across Texas reported seeing a bright ball of light streak across the sky around 9 p.m. Saturday.

Many submitted a formal report to the American Meteor Society (AMS), though most have settled for a response on the Facebook page Texas Storm Chasers.

“Streaking from North to Southwest a full hand span in length a large meteorite full of red orange and yellow,” commented Joel Dacus from West Plan. “Largest I’ve ever seen in 50 years! Size 10 fold larger than Venus. Large debris trail at least 20 degrees across sky… then another smaller meteorite within 10 mins streaking east to west… wow what a show in one sitting.”

According to AMS, thousands of fireballs enter the Earth’s atmosphere every day, though the vast majority occur over the ocean and regions that are uninhabited. As a result, very few are detected.

The different colors are a result of the meteoroid’s composition. Sodium produces bright yellow, for example, while nickel results in a green huge and magnesium blue-white. The velocity of the object can influence coloring, too, since kinetic energy intensifies certain colors.

However, AMS notes that reports of color “must be treated with caution” since the events are brief and easily misreported.

In order for a fireball to have a chance of reaching the ground, it generally must boast a magnitude of -8 to -10, or twice the brightness of Venus. Furthermore, AMS explains, “the parent meteoroid must be of asteroidal origin, composed of sufficiently sturdy material for the trip through the atmosphere” and “must enter the atmosphere as a relatively slow meteor.”