Home Strange Stories Is there a Loch Ness Monster in Siberia?
UNEXPLAINED MYSTERIES 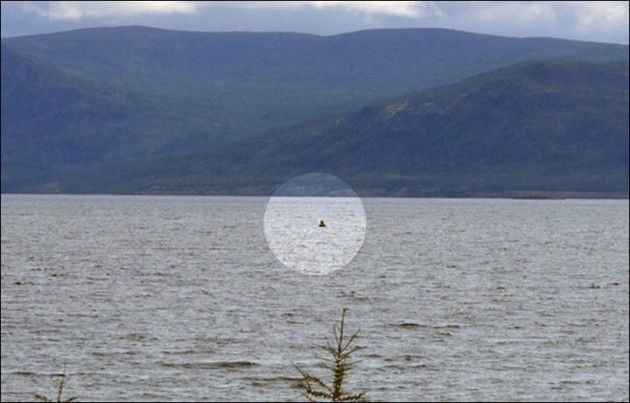 Known as ‘Russia’s Loch Ness Monster’, the accounts of the creature in Yakutia predate the Scottish claims yet in many ways are similar.

Intriguingly, too, there are theories that Labynkyr – which has unusual cracks on its 60 to 80 metre deep floor – is connected by underwater channels to another lake, Vorota, where monster sightings have also been recorded, including by respected Soviet geologist Viktor Tverdokhlebov, an academician not given to hyperbole.

Associate Professor of Biogeography Lyudmila Emeliyanova revealed to The Siberian Times that on her own scientific mission to Labynkyr she recorded ‘several seriously big underwater objects’ with sonar readings.

She is not the only researcher to have done so.

‘It was our fourth or fifth day at the lake when our echo sounding device registered a huge object in the water under our boat,’ she said.

‘The object was very dense, of homogeneous structure, surely not a fish nor a shoal of fish, and it was above the bottom. I was very surprised but not scared and not shocked, after all we did not see this animal, we only registered a strange object in the water. But I can clearly say – at the moment, as a scientist, I cannot offer you any explanation of what this object might be.’

The readings were repeated and she became convinced there was more than one large living object in the pure waters.

‘I can’t say we literally found and touched something unusual there but we did register with our echo sounding device several seriously big underwater objects, bigger than a fish, bigger than even a group of fish.

‘This is why I fully support the idea of a new trip there and extra research.

‘I would love to take part in another visit to this lake. I know how to organise it and know enough good local people who can help on the spot. It is a hard trip I must say but it is definitely worth doing it again. This mysterious and very deep lake still has some secret to tell us.’

Freshwater Labynkyr, some 5,000 km east of Moscow, is mysterious for another reason, too. It is only around 60 kilometres from the settlement of Oymyakon – the coldest inhabited place on Earth – yet, astonishingly, the lake does not freeze over completely in winter, in contrast to virtually all lakes in the region. The ice that does form, unusually, can be too thin to walk on. It is not uncommon to driver cars on lakes in Yakutia in winter: but not Labynkyr.

On the basis of ‘sightings’ there has been speculation that Labynkyr and Vorota might be inhabited by a school of ichthyosaurs, prehistoric marine reptiles resembling dolphins or sharks, or plesiosaurs, a popular theory concerning ‘Nessie’ in Scotland which is often depicted with a long neck.

Another version has speculated that relic killer whales could have become marooned in Labynkyr. Some accounts even suggest the ‘creature’ makes a hideous primeval cry as it attacks its prey.

Rumors of a strange, giant creature living in Lake Brosno have existed for several centuries. One legend says that the lake monster scared to death the Tatar-Mongol army that headed for Novgorod in the 13th century. Batu Khan stopped the troops on the sides of Lake Brosno to rest. Horses were allowed to drink water from the lake. However, when the horses ventured down to the lake, a huge roaring creature emerged from the water and started devouring horses and soldiers. The Batu-khan troops were so terrified that they turned back, and Novgorod was saved. Old legends describe an “enormous mouth” devouring fishermen. Chronicles mention a “sand mountain” that appeared on the lake surface from time to time. According to another legend, some Varangians wanted to hide stolen treasure in the lake. When they approached the small island, a dragon came to the surface from the lake and swallowed the island up.

It was rumored in the 18th and 19th centuries that the giant creature emerged on the lake surface in the evening, but immediately submerged when people approached. It is said that during World War II the beast swallowed up a German airplane. There are witnesses who say they chanced to see Brosnya walking in the water. Locals say that it turns boats upside-down and has to do with the disappearances of people.
Source Siberian Times