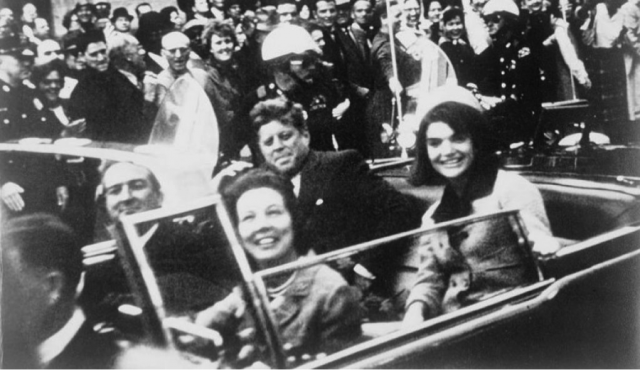 The United States could be considered the conspiracy theory capital of the world at the moment. By no means alone in that respect, not many places around the world can point to so many world changing events in history and saddle ‘conspiracy theory’ at them. One of the more popular examples of this is the John F. Kennedy assassination conspiracy theory. There are many theories: it was the work of Castro, the CIA, the Mafia, the KGB. Have you heard the new one? It was an elaborate cover-up called the Kennedy assassination hoax..

An artist by trade, Miles Mathis proposed this shattering Kennedy assassination hoax theory in more recent times. According to this new idea, JFK’s father, Joseph Kennedy, harboured political ambitions for his eldest son, Joe Jr., back in 1944. Before this could be realised, the young Joe was on a secret wartime mission when the aircraft he was aboard exploded in mid flight. Whatever went wrong with this flight, it was said to have been recorded on film by the 8th Combat Camera Unit. Once the grieving process was complete, Joseph turned to his surviving eldest son, John, in order to make his dreams a reality. Joseph Kennedy had been a well-known player within cinematic circles. He was the owner of a film studio and had a controlling interest of RKO Pictures, and went on to develop Pathe.

The “King” and His Shadow Government

JFK’s time in office was certainly not uneventful. He single-handedly started the Space race, the Bay of Pigs incident, Vietnam, and the Cuban Missile Crisis. Plus, he was involved in many other nervous incidents that took place during the early 1960s. According to Mathis, JFK’s affection for the Oval Office did more than match his father’s machinations. JFK wanted to be the one in charge beyond his allotted two terms in the public eye. He wanted to create a dynasty and imagined himself more like a King. Mathis also speculates this is why he nicknamed his Cabinet ‘Camelot’. Based on the theory, what the Kennedys really wanted was to create, organize and run an entire Shadow Government far away from the limelight of the Presidency of the United States.

Things supposedly changed one day during November 1963 and action was needed. Far from dying during the Second World War, Joe Jr. purportedly survived and pulled a lot of strings from the background that helped shape White House policy and, ultimately, put his younger brother into office. The film that captured the explosion was never found. Perhaps it didn’t even exist. Joe died for real and JFK had to replace him.

Plotted to take place in Dealey Plaza, Dallas, on 22 November 1963 under the scrutiny of the watching world, the Kennedy assassination hoax was brilliantly conceived. At that time, Dallas was just about the worst place that JFK could have been. The city was openly hostile towards the President and it was considered to be a ‘high risk’ area to go campaigning. In addition, the Secret Service operation was limited to say the least. There was very little in the way of protection and the chosen route left a lot of possibilities for something to happen. Any would-be assassin would have a large triangular field of opportunity to take a shot at the open cavalcade.

Self-proclaimed patsy, Lee Harvey Oswald, was hired to take the shot and was silenced a few days afterwards. In Dealey Plaza that day were scores of people to witness the procession. Mathis insists that all of the spectators were just hired extras and plain clothes Secret Service agents. The entire area was actually closed to the public. Of the 32 photographers on the scene at the crucial time, only one managed to shoot footage of the ‘assassination’. The Zapruda film wasn’t the best quality and perhaps deliberately so. It could be that lookalikes were used and might have even been recorded on a different day. The official inquest into the assassination has since become known as the Warren Report and could only be overruled by the US Attorney General – who happened to be Robert Kennedy at the time of the publication.

Believers in the Kennedy assassination hoax and the Kennedy Dynasty put JFK’s genuine death in the summer of 1968. That’s when Sirhan Sirhan reportedly shot Robert Kennedy to death in the early hours of 6 June. To this day, Sirhan protests his innocence. Like Oswald before him, perhaps Sirhan was just a convenient scapegoat to help the Kennedy clan prosper without ever being seen again. Robert Kennedy must have held the reins for almost three decades until late 1999. This was when JFK’s son took his family on a short flight from which they never returned. Was it necessary for JFK’s son to take over control of the Kennedy Dynasty?

All during this time, Ted Kennedy has held a seat on the US Senate Committee for about as long as anyone has. In this entire scenario, it has been his job to keep an eye on Congress and be something like the public face of the Kennedy clan. Since the JFK Presidency ended, many of his successors have been described as everything from a clown to weak and easily controlled. Two terms during these times, an actor has also taken on the responsibilities.

What is the Family’s True Legacy?

Most experts dismiss these assertions of a Kennedy assassination hoax and firmly believe that all of the Kennedy deaths happened just as reported and when reported. During electioneering, the policies of the Kennedys and their opponents (Lyndon B Johnson and Richard Nixon) differed. JFK wanted to end the conflict taking place half a world away in Vietnam. Johnson didn’t, and neither did Nixon after him. This conflict escalated into a full-out war between the two nations. Harry Truman appeared to be an avid supporter of JFK, but supposedly he hated JFK’s father.

Ask any American whether or not there is a Government within a Government and many will answer in the affirmative. Is this the real legacy of the Kennedy clan and, far from being a curse, is it actually a blessing? Commentators down the years have long insisted that the Kennedy family is the closest thing that America has to royalty. Are these same people privy to facts most of us just don’t have access to?

Les currently resides in London and is an ancient alien theorist. He has a long standing interest in the paranormal and the unexplained. In his spare time he enjoys astronomy and Xboxing. It’s a big Universe out there!