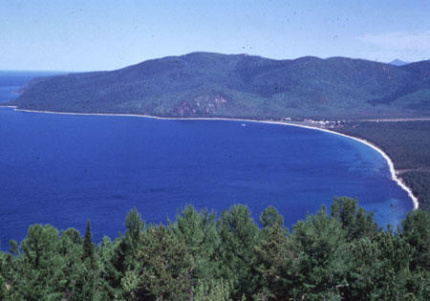 A little known lake in Russia has become the worlds top UFO seekers destination as previously “secret” files confirm recent sightings as “not of this world”. Lake Baikal is the deepest fresh water body in the world.

Rumours are spreading fast that a UFO has  landed in the lake, and is now based deep below the lakes surface.

The records dating back to soviet times were compiled by a special navy group collecting reports of unexplained incidents delivered by submarines and military ships. The group was headed by deputy Navy commander Admiral Nikolay Smirnov, and the documents reveal numerous cases of possible UFO encounters. Top of the list is Lake Baikai.

Reuters reports more than 50 sci-fi fans have set up camp on the southern end of Lake Baikai to search the skies for extra terrestrial life as part of the ‘Trans-Eurasian UFO-Search expedition.’

The UFO devotees were drawn to the lake after locals reported an increase in strange object sightings just before the release of the government X Files.

‘Here, in 1958 there was an TU-154 airplane crash. There were some reports from the locals that a UFO pursued the air craft till it reached Baikal waters right here. And there were frequent reports of UFO activity around Baikal. So this is the reason why we decided to meet here. I hope that we will be lucky enough to shoot something interesting,’ participant Vladimir Kuznetsov told Reuters.

Kuznetsov arrived at the lake armed with his own device for monitoring radiation and omissions, while other fans use photo and video cameras to document any sighting.

Two expedition members, Anastasia and Andrey Chernobrov, claim to have spotted a UFO during the space stake-out.

‘At first the object did not move, but it had a peculiar glow, flashing with different colours – blue, red, yellow, green… We started watching it, and a few minutes afterwards the object began to move chaotically, not like a helicopter, or a plane, or any other terrestrial machine which can fly,’ Andrey Chernobrov told Reuters.

The expedition is one of the biggest in recent years, as the participants hope to prove we are not alone in the universe.

UFO encounters is Russia’s Lake Baikal, the deepest fresh water body in the world. Fishermen tell of powerful lights coming from the deep and objects flying up from the water.

In one case in 1982 a group of military divers training at Baikal spotted a group of humanoid creatures dressed in silvery suits. The encounter happened at a depth of 50 meters, and the divers tried to catch the strangers. Three of the seven men died, while four others were severely injured.

“I think about underwater bases and say: why not? Nothing should be discarded,” says Vladimir Azhazha.“Skepticism is the easiest way: believe nothing, do nothing. People rarely visit great depths. So it’s very important to analyze what they encounter there.”