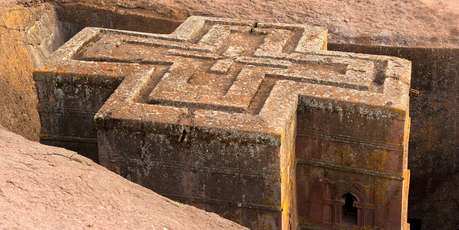 A prince was miraculously unhurt after being covered as a baby by a swarm of angry bees. It was an omen that he’d one day rule a vast swathe of what is present-day Ethiopia.
However, his brother, the king, was jealous of Lalibela’s popularity and tried poisoning his younger sibling with a herbal potion. Against all odds, the prince survived. But, while drugged by the poison, he was taken to heaven to see a complex of churches. Angels instructed him to build similar structures on earth.

So, when Lalibela became king he assembled a vast army of workers who built 11 churches in three clusters on a patch of land, roughly one square kilometre in size, alongside the town.

The still-used complex remains sacred to just over half of Ethiopia’s 90 million people – followers of the Ethiopian Orthodox Church, one of the world’s oldest Christian denominations which traces its history to the fourth century.

Each large church – a few of which are linked by tunnels – is, in fact, a big rock.

The end-result looks as if the churches were dropped into the pits that contain them. Though called “underground churches” the sky is visible above.

Some churches are filled with religious art – including gory portrayals of the spearing or impaling of non-believers – as well as elaborately carved relics of gold, brass and wood.

Outside the churches, monks live in caves in the pit walls, relying for survival on donations from local residents and visitors, and spending their waking hours praying or reading religious texts.