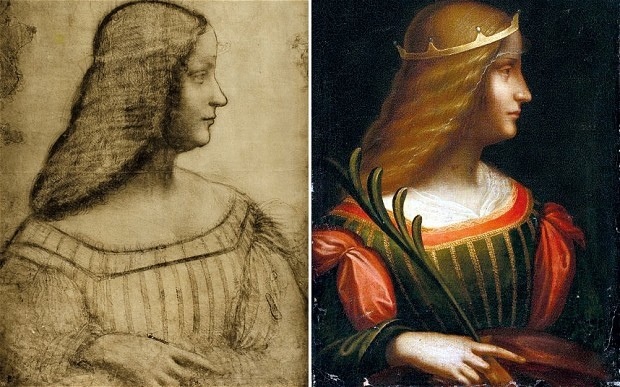 The unexplained mystery of the missing masterpiece

It was lost for so long that it had assumed mythical status for art historians. Some doubted whether it even existed.
But a 500-year-old mystery was apparently solved today after a painting attributed to Leonardo da Vinci was discovered in a Swiss bank vault.

The painting, which depicts Isabella d’Este, a Renaissance noblewoman, was found in a private collection of 400 works kept in a Swiss bank by an Italian family who asked not to be identified.

It appears to be a completed, painted version of a pencil sketch drawn by Leonardo da Vinci in Mantua in the Lombardy region of northern Italy in 1499.

The sketch, the apparent inspiration for the newly found work, hangs in the Louvre Museum in Paris.

For centuries it had been debated whether Leonardo had actually had the time or inclination to develop the sketch into a painted portrait.

After seeing the drawing he produced, the marquesa wrote to the artist, imploring him to produce a full-blown painting.
But shortly afterwards he embarked on one of his largest works, The Battle of Anghiari on the walls of Florence’s town hall, and then, in 1503, started working on the Mona Lisa.

Art historians had long believed he simply ran out of time — or lost interest — in completing the commission for Isabella d’Este.
Now it appears that he did in fact manage to finish the project — perhaps when he encountered the aristocrat, one of the most influential female figures of her day, in Rome in 1514.

Scientific tests suggest that the oil portrait is indeed the work of da Vinci, according to Carlo Pedretti, a professor emeritus of art history and an expert in Leonardo studies at the University of California, Los Angeles.

“There are no doubts that the portrait is the work of Leonardo,” Prof Pedretti, a recognised expert in authenticating disputed works by da Vinci, told Corriere della Sera newspaper.

“I can immediately recognise da Vinci’s handiwork, particularly in the woman’s face.”

Tests have shown that the type of pigment in the portrait was the same as that used by Leonardo and that the primer used to treat the canvas on which it was painted corresponds to that employed by the Renaissance genius.

Carbon dating, conducted by a mass spectrometry laboratory at the University of Arizona, has shown that there is a 95 per cent probability that the portrait was painted between 1460 and 1650.

But there needs to be further analysis to determine whether certain elements of the portrait — notably a golden tiara on the noblewoman’s head and a palm leaf held in her hand like a sceptre — were the work of Leonardo or one of his pupils, Prof Pedretti said.
A likely contender would be Gian Giacomo Caprotti, nicknamed Salai, who began working with Leonardo as a child and is believed to have become his lover.

The newly discovered portrait, which measures 24in by 18in, does bear a striking similarity to the Leonardo sketch held by the Louvre — the woman’s posture, her hairstyle and her dress are almost identical, while her enigmatic smile recalls that of the Mona Lisa.
Martin Kemp, professor emeritus of the history of art at Trinity College, Oxford, and one of the world’s foremost experts on da Vinci, said if the find was authenticated it would be worth “tens of millions of pounds” because there are only 15 to 20 genuine da Vinci works in the world.
But he raised doubts about whether the painting was really the work of Leonardo.

The portrait found in Switzerland is painted on canvas, whereas Leonardo favoured wooden boards.

“Canvas was not used by Leonardo or anyone in his production line,” Prof Kemp said. “Although with Leonardo, the one thing I have learnt is never to be surprised.”

There are further doubts – Leonardo gave away his original sketch to the marquesa, so he would not have been able to refer to it later in order to paint a full oil version.