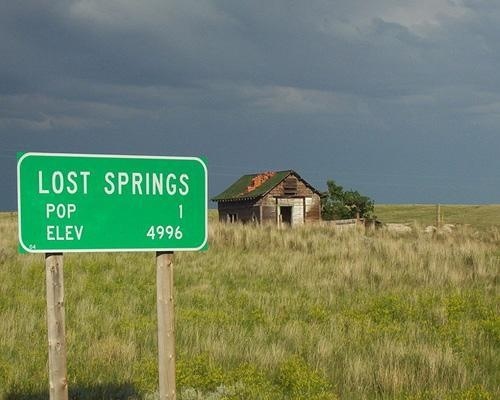 You’ve heard of a one-horse town, but what about a one-person town? Scattered throughout the U.S. are places with populations you can count on one hand — and sometimes one finger. Some of these places were evacuated after devastating environmental disasters, others simply saw residents move away as local businesses closed and economic opportunities faded. But each of these places has an intriguing story worth telling, and each one is home to some unique residents — or at least one. So check out these lonely locations, grab some friends, and plot out a population-doubling road trip.

Lost Springs was first inhabited in the 1880s and received its name from railroad workers who were unable to find the springs shown on survey maps of the area. When the town was incorporated in 1911, 200 people lived there, mostly coalminers.

The road sign that lists Lost Spring’s population as one, which is based on the 2000 census, is a source of contention for the town’s few residents. Lost Springs Mayor Leda Price says she’s lived there for 37 years and there has always been more than one person. In fact, before the 2010 census, a woman moved in with one of the town’s three residents, increasing the population by 33 percent. Today, Lost Springs is home to four people and two businesses: the general store, which is owned by Mayor Price, and a post office.

When you enter this Nebraska town, a road sign will tell you the village has a population of two, but Elsie Eiler is the only remaining resident. Eiler’s husband, Rudy, died in 2004, which halved the population. Monowi’s population peaked at 150 during the 1930s, but like many small towns in the Great Plains, it lost residents to larger cities with more job opportunities.

Today, Eiler is not only Monowi’s sole resident, but she’s also the mayor, librarian and bartender. She manages the town’s budget (about $500 a year) at “city hall,” an old desk inside the town’s only business, the Monowi Tavern, and once a year she raises “taxes” to keep the village’s four streetlights on. Nearby towns supply most of the tavern’s customers who say the $2.50 hamburgers and $2 beers are the best in town. (Eiler granted her own liquor license.) Behind the tavern sits a 5,000-book library that Eiler constructed in 2005 in memory of her husband. The library was her late husband’s dream, and it’s become a hit with residents of surrounding towns. 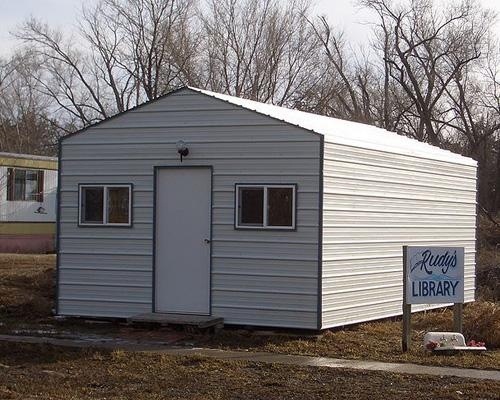 This small, unincorporated community is the last surviving stagecoach stop along the Apache Trail, and with a population of six, it’s Arizona’s smallest official community that has a post office and voter’s precinct. Today, Tortilla Flat consists of a restaurant, a gift shop and a saloon, which is the kind of place where visitors can enjoy a cold beer or sarsaparilla and even take in a gunfight. The town is owned by Alvin and Pam Ross, who bought it in 1988, but they’re willing to part with this piece of Old West history for the right price. The town has been listed for sale on eBay for $5.5 million. 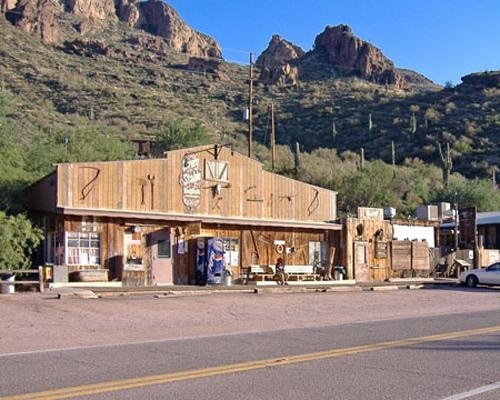 The tiny town of Buford is an unincorporated community that was formed as a military outpost in 1866 to protect railroad workers. It was named after Civil War General John Buford and was once home to 2,000 people; these days, it’s home to just one.

Don Sammons left Los Angeles in 1980 in search of a quieter lifestyle, and he certainly found it in Buford. He and his wife bought the tiny town that consisted of six buildings and seven people, but by the mid 1990s, everyone except Sammons, his wife and son had moved on. Fifteen years ago his wife passed away, and three years ago his 26-year-old son moved to Colorado, leaving Sammons completely alone. But Sammons says he loves the slow pace of windy little Buford and he’s never lonely. He runs a gas station and convenience store that gets about 1,000 visitors a day during the summer, but in the winter his visitors drop to about a 100 day due to Buford’s freezing winds that reach speeds of up to 70 mph. 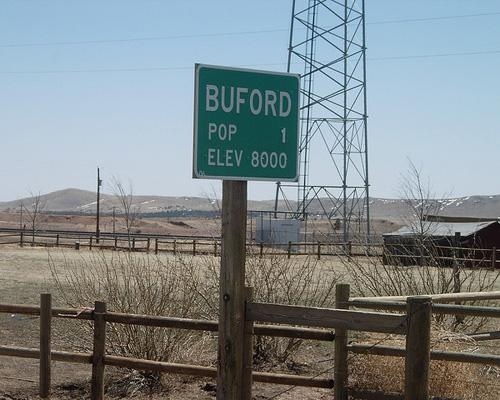 This Colorado silver mining town is largely abandoned. The majority of it burned down in 1937 — today, deteriorated structures outnumber those that still stand. Bonanza doesn’t have a single business and it has no post office, but according to census data, it has a population of seven. Writer Antonya Nelson and her husband began buying up parts of the town in 2005, and today they own three blocks of Bonanza as well as an abandoned mine and a graveyard. Nelson says she doesn’t have a street address and can’t seem to acquire one because none of the buildings she owns is officially on the grid.

While Bonanza doesn’t have addresses or cellphone service, it does have characters. Nelson says the town is inhabited by hermits: “You never see two together. Ever. For all I know, it’s one guy with a lot of costumes.” But Nelson has learned a few things about her handful of neighbors. One is a priest from Trinidad who lives in Bonanza to escape his parishioners. Another is a woman with a landline and a phone-sex service. 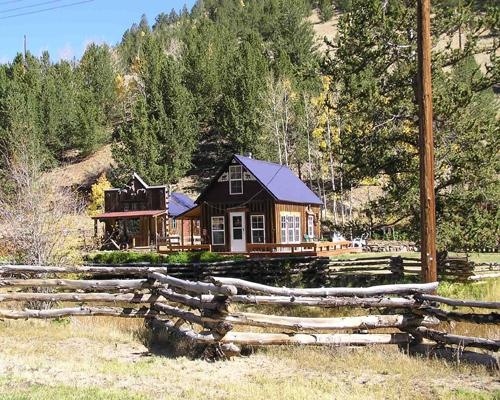