Mystery on the reef

Americans Eileen and Tom Lonergan were keen divers, holidaying on Australia’s Gold Coast. On Sunday January 25, 1998 they set off on a dive trip to St. Crispin’s Reef, a popular site on the Great Barrier Reef, 25 miles off the coast of Queensland near Port Douglas.

By all accounts that Sunday was one of those glorious hot and tropical north Queensland days.

The Lonergans, diving veterans from Baton Rouge, Louisiana, had gone out with the Port Douglas based scuba boat Outer Edge and on which they would not return!

Stories and reports vary about what happened on the dive trip. It is clear that at the end of the day, the crew did a head count, which is standard practice. On the count they came up with only 24 of their 26 clients. Someone pointed out two young divers who had jumped in to swim off the bow, and the crew, assuming that they had missed them during the count, so adjusted the count to 26.

With the swimmers back on board, the Outer Edge headed back to port.

Concerned, he called the owner of the Gone Walkabout Hostel, in Cairns, where the couple had been staying, to see if they had returned. They had not.

A massive five-day search began of the reef, which turned up no trace of Eileen or Tom.

After more than 48 hours in the ocean, the couple may have drowned, or been eaten by sharks.

As the chilling story broke world wide, strange information about the couple, and other bizzare theories and emerged.

That they committed suicide, or a murder-suicide took place.

Journals in their hotel room hinted at personal troubles, but the couple were devout Catholics with good prospects. Tom, 33, and Eileen, 28, had just come off a three-year tour of duty with the Peace Corps in Tuvalu and Fiji and were en route to Hawaii, where they hoped to settle down.

A diary entry by Tom Lonergan said he was ready to die, and one by Eileen just nine days before the dive said “Tommy” had a deathwish and hoped for a quick, painless death.

Another scenario has the Lonergans using the dive boat as part of an elaborate hoax to fake their deaths. Jeanette Brenthall, owner of a bookshop in Port Douglas, believes the couple came into her store on January 27, two days after their dive trip. The pair was also reportedly sighted in a hotel in downtown Darwin.

Reports of a boat less than a mile from St. Crispin’s Reef seem to support theories that the couple was picked up. But the Lonergans’ bank accounts were never touched again, and no one ever collected on their insurance policies. 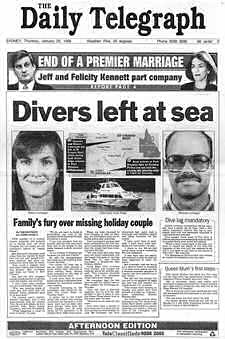 A three weeks after they’d gone missing, some of their personal dive gear started to wash up on a beach 75 miles from the dive site. Then, about six months later, a dive slate was found, Dated Monday, January 26, at 8am, the message on the slate read:

The sun weathered slate was found in the same vicinity, at Archers Point South of Cooktown, as the dive gear that washed up.

Further mystery was added whenit was proven that it could not have floated ashore, as it was demonstrated on TV how the actual slate sank in a bucket of water.

Evidence therefore suggested that the slate had been “planted” to provide proof of the couple having been being left at sea.

The dive slate was even claimed to have been planted there by the American CIA agents.

The diving fraternity was even sceptical the tablet was genuine, suggesting it was part of an elaborate “disappearance” hoax. 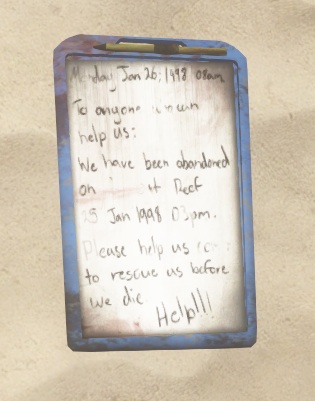 In November 1999, Geoffrey Nairn was tried on manslaughter charges and acquitted; he believes the jury felt he shouldn’t be blamed for a mistake made by the entire crew. His company, Outer Edge Dive, was tried by a civil court in Queensland, pled guilty to negligence, and was fined.

Nairn, who closed down Outer Edge Dive shortly thereafter, believes that the Lonergans died on the reef. “It was a tragedy, and I’ll never get over it,” Back in Baton Rouge, Eileen’s father, John Hains, also believes that the couple drowned after being accidentally left behind. “The Australian dive industry wanted to prove that Tom and Eileen faked their deaths,” he says of the disappearance theories.

Yet another theory is that they were CIA agents that had stumbled on sensitive information and knew too much., and then either did a runner or were assassinated. A murder suicide was also talked about as an option by the lawyer for Outer Edge.

Later that year an inquest found the holiday almost certainly ended in terror for the experienced divers after charter boat Outer Edge left without them. Authorities were not notified for two days.

Coroner Noel Nunan’s inquest was presented with graphic evidence of a deep sea nightmare and brought home the dark reality of being adrift at sea.

This mystery has inspired the making of the movie ‘Open Water’ with Blanchard Ryan and Daniel Travis, which has been described as a mix between Jaws and Blair Witch, and it has outraged the north Queensland dive industry.