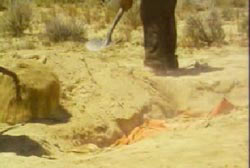 Farmington, New Mexico, 1933. In the heat of the summer, a pilot named Red Moiser landed several mysterious flights in the desert. There, he was met by a Mexican millionaire named Leon Trabuco.

It’s believed that Trabuco and four other men were quietly buying up much of Mexico’s gold reserves to resell in the United States when the price went up. Trabuco was convinced that because of the Great Depression, the United States would soon devalue the dollar, and that gold prices would skyrocket. But the chance to make huge profits carried huge risks. The gold had to be smuggled into the United States. If the men were caught, they faced long prison terms.

At a makeshift Mexican foundry, gold coins and jewelry were melted down and cast into ingots. In less than three months, the partners had collected almost 16 tons of solid gold.
Trabuco searched the US for a safe place to hide the illegal treasure. When he couldn’t find a suitable spot, he decided it would be smarter to bury the gold.

Legend has it that Trabuco chose a sparsely populated region of New Mexico, near the Ute and Navajo Indian Reservations. Red Moiser allegedly made 16 flights, carrying one ton of gold each time. Pick up trucks then transported it to a secret burial site. Trabuco never revealed the location to his co-conspirators. And he never made a map.

The group decided not to sell the gold, hoping the price would go even higher. But they were not aware of an executive order related to the Gold Act. It declared that after January 1934, private ownership of gold within the US was illegal. According to treasure hunter Ed Foster, the partners had missed their chance to strike it rich:

“FDR put into effect the gold embargo that takes gold off of the market and makes it illegal, and so, consequently, these five men from Mexico City, they had 20 ton of junk. It was not worth a dime because they couldn’t sell it for anything.”

The gold seemed to bring bad luck. Within five years, three of the partners had died untimely deaths. Over the next two decades, Trabuco was unable to sell the now illegal gold. When he died, he apparently took the secret location to his grave.

For 35 years, Ed Foster searched for Trabuco’s treasure in the desert around Farmington, New Mexico. He’s convinced that he found the 1933 landing strip used by Red Moiser on a plateau called Conger Mesa:

“I believe that Conger Mesa is where the plane would adjust and come in and land. I met this Indian lady that couldn’t speak English so I got an interpreter. She said she had watched that plane land there many, many times.”

Ed interviewed another Navajo woman who was six years old in 1933. Ed said she remembered several Mexican men who lived on the Reservation:

Twenty miles west of the mesa, near an old Navajo home, stands a building unlike any other on the reservation. Ed believes it was built by men Trabuco hired to guard the gold:

“This house has windows, a front door, and a back door. And it had a veranda. To me, this house would look good in Tijuana, Mexico, but not on the Navajo reservation.”

Ed also found another intriguing clue: a date and some words etched in the face of a stone outcropping. He calls it Shrine Rock, and believes it may be the key to finding Trabuco’s treasure. It reads: “1933 sixteen ton.”

Ed is sure that the gold is buried somewhere within this triangle formed by Conger Mesa, Shrine Rock and the Mexican-style home. Ed asked renowned treasure hunter Norman Scott to make a detailed survey of the area: