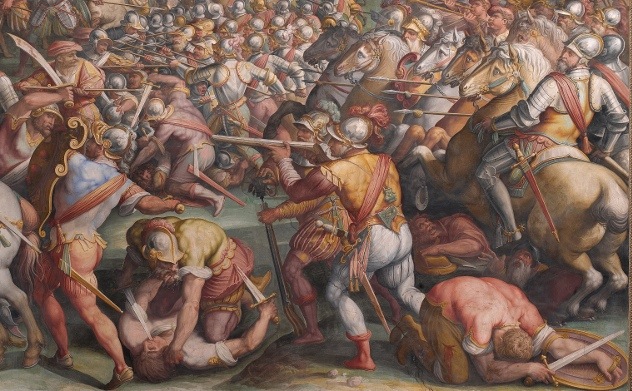 Often referred to as “The Lost Leonardo,” The Battle of Anghiari is a painting depicting four horsemen in armed combat during the Battle of Anghiari in 1440. Originally planned for the Hall of the Five Hundred, the meeting chamber of the victorious Florentine forces, da Vinci began the painting in 1505. It was going to be the largest he had ever done. Unfortunately, the technical problems which had also plagued The Last Supper overwhelmed da Vinci, and he abandoned the project.

In the years that followed, another painter, Giorgio Vasari, was commissioned to paint a new mural (The Battle of Marciano, pictured) in the same location, and The Battle of Anghiari was lost to history.

However, recent scholars have found compelling evidence to suggest it is still intact underneath Vasari’s mural and that it may have been intentionally saved by Vasari.

Some even believe that it was completed and Vasari made up the story of it being left partially finished in order to paint over it. Work has stopped as of today, with local politicians, as well as art historians, hesitant to potentially damage Vasari’s work (a masterpiece in its own right), leaving the possible discovery of da Vinci’s painting in limbo.