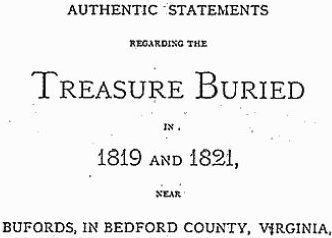 This is the true story of “The Beale Papers.” It is set in the forested foothills of the Blue Ridge Mountains where they cut through antebellum Virginia, and it is a tale of adventurers, farmers, newspapermen and treasure lost

Thomas Beale supposedly buried a treasure in the Virginia Hills in 1819 and 1821. Beale drafted three encrypted ciphers of “numbers” that reportedly gave the directions to the vault where the treasure was buried, who was involved, and what was buried. These ciphers were given to Mr. Robert Morriss for safe keeping in 1822. Once an unspecified time went by, a “key” to the ciphers would be given to decode the ciphers. But the key never arrived nor was there ever any communication with Mr. Beale again. Mr. Morriss forgot about the box that contained the papers until 1845, in which he finally opened the box. And eventually the papers were found and were published in 1885, by J.B. Ward.

The first cipher remains unsolved, and is reportedly the location of the great haul of treasure that remains buried.

The second cipher contains more details on the location of the treasure, along with its contents. Cipher 2 has been decoded. Using the Declaration of Independence (since it is the only known document where the words were numbered) taking the numbers from the cipher and matching the number to the words in the declaration, then taking the first letter of the word that is that number. So for instance, the word “unalienable” is number #95. So if you find the number 95 in the cipher, then 95 represents the first letter of “unalienable” which is “u”. Get it. It’s a simple cipher code.

The translation of the 2nd cipher

“I have deposited in the county of Bedford, about four miles from Buford’s, in an excavation or vault, six feet below the surface of the ground, the following articles: belonging jointly to the partied whose names are given in number “3”, herewith:

The above is securely packed in iron pots, with iron covers. The vault is roughly lines with stone, and the vessels rest on solid stone, and are covered with others. Paper number “1” describes the exact locality of the vault so that no difficulty will be had in finding it.”

Mr. Morriss waited until 1845 before finally opening the box, for he expected to see Mr. Beale again. But he never did. He never could decipher the “numbers” after trying and trying. Not until 1862, that he trusted someone enough to reveal the secret about the box.

In a letter dated January 1822, Mr. Beale explains where he and his associates found the treasures. About 300 miles north of Santa Fe, in a small ravine, they discovered a cleft in the rocks and saw gold. They worked for 18 months to dig this gold and silver out. They put it in common receptacles and agreed that each had an equal share of the treasure. They even got some Indians to help with the labor. The men decided to transport the treasure to Virginia, in a cave near Buford’s tavern. They also agreed that Mr. Beale would pick a person to carry out the provisions of the group to their relatives, in case of any accident to them. So Mr. Morriss was picked. Now he knows why he was given this task and the box.

Mr. Morriss was to divide the treasure in 31 equal parts, with one part for him, and distributed to the names given in the 3rd cipher.

The treasure has never been found, and treasure seekers still search. 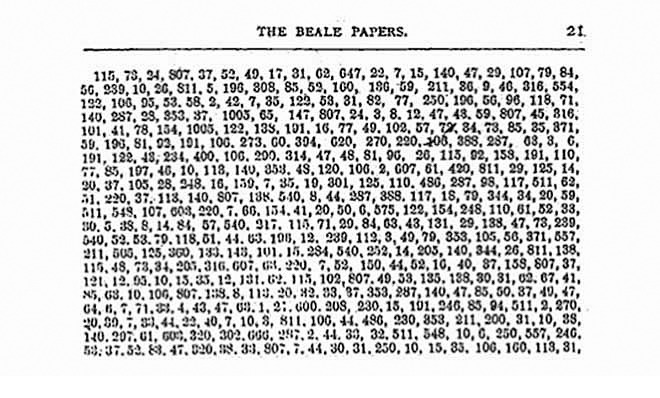