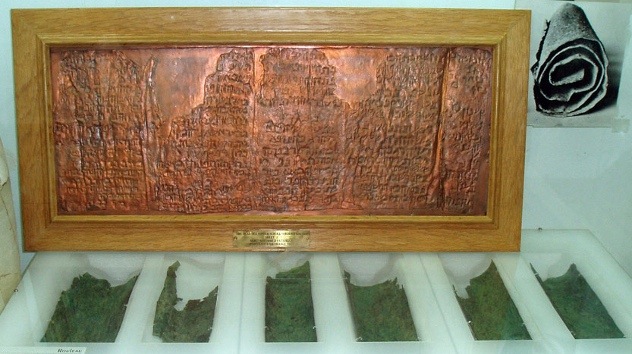 The Copper Scroll is one of the 981 texts found at Khirbet Qumran between 1946 and 1956, collectively known as the Dead Sea Scrolls. It holds special significance to Indiana Jones–hopefuls because it purports to be a treasure map. Written on very thin sheets of rolled-up copper, it is the only document found at Khirbet Qumran not written on either parchment or papyrus. In addition, the Hebrew which is inscribed onto it differs from that of the other scrolls. It is of a sort which was more commonly used hundreds of years later.

The Copper Scroll mentions over 60 different locations, with varied amounts of gold and silver said to be buried or hidden at each of them. It is often highly specific, with directions such as “in the gutter which is in the bottom of the rain-water tank . . . ”

No evidence, other than the scroll itself, has ever been found to indicate the existence of these hoards, but that hasn’t stopped a number of people from leading expeditions to find them. Some scholars believe it’s more than likely that the Romans already found all of treasure, as they had a habit of torturing captives in order to find their secret stashes.

The full list of locations of the hidden treasure of course remains a closely guarded secret.

The Treasure of the Copper Scroll

Located to the west of the northern tip of the Dead Sea and near to the town of Kalya is the Qumran archaeological site. On a desert plateau carved by ravines are the caves where the famous Dead Sea Scrolls were initially discovered by bedouin in 1946. The later excavation of 11 caves by archaeologists sponsored by the Jordanian Department of Antiquities uncovered 972 parchment and papyrus texts and two unusual scrolls made of copper. These would turn out to be one scroll that had been divided into two pieces.

This rare find was discovered on the 14th March 1952 at the back of Cave 3, somewhat separate from the other finds. The scroll was badly oxidised and fragile to touch but it was obvious that it was different from the other leather and paper scrolls – it was a detailed list of 64 locations where significant amounts of gold and silver had been hidden. It was written as if anyone reading it would have familiarity with the places mentioned and is believed to have been created between 110 and 30 BCE. Although many historians believe that some of the treasure may have been located by the Romans during their occupation of the region it is reasonable to think that at least some of the locations were never revealed.

For Example: Item 3. In the funeral shrine, in the 3rd row of stones: One hundred gold ingots. Item 5: In the ascent of the ‘staircase of refuge’, to the left-hand side, three cubits up from the floor are forty talents of silver. Item 32: In the cave that is next to (unknown) and belonging to the House of Hakkoz, dig six cubits. Within are six ingots of gold.