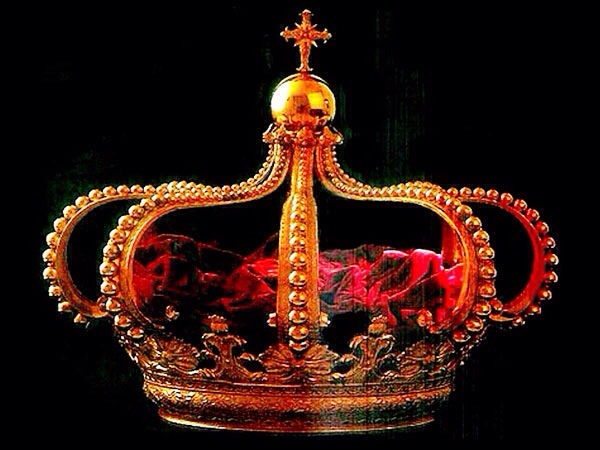 King John ‘the Bad’ was particularly fond of collecting (stealing) jewellery and gold plate for himself and coinage for his guards, soldiers and court followers.

In 1216 King John travelled to Bishops Lynn in Norfolk where he arrived on the 9th October. The area is aptly named The Wash as it was once a huge expanses of marshes and dangerous mud flats. At Bishop’s Lynn King John fell ill with dysentery and decided to return to Newark Castle via Wisbech. He took the slower and safer route around The Wash. However, his soldiers and carts full of his personal possessions, including the crown jewels he had inherited from his grandmother the Empress of Germany, took the shorter route through the marshes. Trapped by the tide they were drowned – possibly close to Sutton Bridge. The treasure carts were lost and never recovered. King John died a few days later on the 18th October 1216.

What really happened is probably much more complex.

Legend has it that crown jewels, gold and money were lost in the medieval mud of the fens in 1216.

It was the year after the Magna Carta was sealed, the country was in revolt and King John was having to quell rebellion uprisings. He had been travelling from the port of King’s Lynn to Lincoln when, according to historical chronicles, the treasure was lost.

It has since become one of the most sought after troves in the country.

Now, clues about the disappearance of King John’s treasure have been unearthed in a “game changing” archaeological survey, according to historian and archaeologist Ben Robinson.
“These images show in remarkable detail the way the landscape has changed radically since King John’s time,” says Mr Robinson, who has been investigating the route for the BBC’s The Last Journey of the Magna Carta King.

“Our view now of straight roads and rectangular fields in the fens is not reflective of the landscape the king had to travel through.”