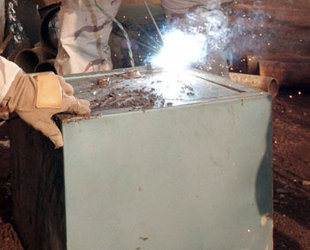 Several weeks ago I received a late Christmas present when I reached into the pocket of an my old ski-jacket and pulled out a $20 bill. That kind of good fortune is common; your old clothing can often be a forgotten gold mine. But a man in the U.S. hit the jackpot when he cracked open a safe he had purchased on eBay.

A Bartlett, California, man bought the old safe from James Labrecque for $122.93. When the man opened the safe, he found $26,000 in cash, a revelation that will haunt Labrecque for quite some time.

“I made a mistake, you know, that’s what it boils down to,” said Labrecque in a WMCTV.com story.  “And it cost me dearly.”

Labrecque, an eBay veteran of more than 15 years, saw the safe as just another product to flip since he didn’t have the combination for it.

The man who discovered the cash had brought the safe to a welder in order to cut it open. After the money was found inside the safe, the buyer shared the news with Labrecque and gave the eBay veteran a positive review. But the news didn’t have Labrecque feeling so positive.

A contentious email chain between Labrecque and the buyer ensued. The regretful Labrecque had asked for a cut of the cash, but the buyer declined, citing Labrecque’s selling policy which states, “What you see is what you get, no returns, and no money back.”

Labrecque doesn’t quite see it that way.