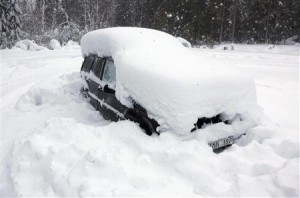 A Swedish man was dug out alive after being snowed in to his car on a forest track for two months with no food, police and local media reported on Saturday.

The 45-year-old from southern Sweden was found on Friday, emaciated and too weak to utter more than a few words.

He was found not far from the city of Umea in the north of Sweden by snowmobilers who thought they had come across a car wreck until they dug their way to a window and saw movement inside.

The man, who was laying in the back seat in a sleeping bag, said he had been in the car since December 19.

“Just incredible that he’s alive considering that he had no food, but also since it’s been really cold for some time after Christmas,” a rescue team member told regional daily Vasterbottens-Kuriren, which broke the news.

Ebbe Nyberg, duty officer at the Umea police, said police saw no reason to doubt that the man had been stuck in the car for a very long time.

“We would not make something like this up. The rescue services were on site too and saw the same as us,” he told Vasterbottens-Kuriren.