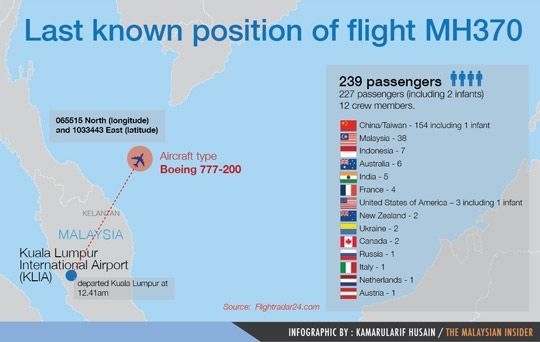 Maps released as part of a preliminary report on the mysterious disappearance of the Malaysia Airlines MH370 jet indicate that the plane deliberately flew along a route to evade military radars, according to a media report. Malaysia released the report on the missing Flight MH370 yesterday which confirmed that the plane avoided flying over land after an unexplained westward turn and flew along a route apparently designed to prevent it being detected by military radars, The Telegraph reported.

Releasing its first findings on the aviation mystery, the Malaysian government provided a detailed map showing the flight’s unusual path after it disappeared from the screens of air traffic controllers on March 8.
The map indicated that the plane did not – as previously believed – follow a series of predetermined navigational waypoints but instead flew directly above the Strait of Malacca and then turned again and traveled south above seas for about seven hours before crashing in the Indian Ocean, the daily said.

This route would have ensured the Malaysia Airlines plane avoided flying over Indonesian territory – thereby reducing the risk of detection – though it may have passed over the northern tip of Sumatra, it said.
The British daily quoted David Learmount, an aviation expert, as saying the route suggested the aircraft was trying to evade detection and to ensure it was not tracked or targeted by the Indonesian air force.

“It does look like the plane was trying to avoid Indonesian air space. It was an aircraft that has gone rogue. It did not need to follow waypoints. There are no roads in the sky – pilots can go wherever they want,” he said. Air traffic controllers failed to notice for 17 minutes that the ill-fated jet had gone off the radar and did not activate a rescue operation for nearly four hours, according to the report.

The investigation report offered no explanation of why the Boeing 777 carrying 239 passengers and crew, including five Indians, flew off course during a routine flight from Kuala Lumpur to Beijing.
A police investigation in Malaysia is continuing, but nothing has been found to suggest the pilot or co-pilot – or anyone else on board – was suspicious or had links to terrorism or were psychologically disturbed.