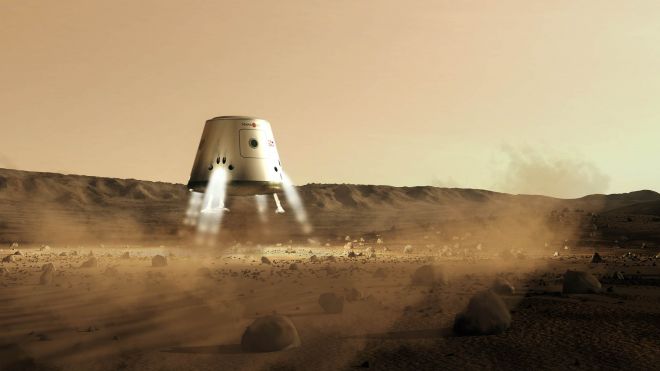 Win a one way seat to Mars!

A company will hold a worldwide lottery next year to select 40 people for a  training team. They will then set up a mock colony in the desert, possibly  somewhere in the U.S., for three months. This initial team will be reduced to  ten crew members.

They will then be sent to Mars, never again to return.

“We will send humans to Mars in 2023,” he told FoxNews.com. “They will live  there the rest of their lives. There will be a habitat waiting for them, and  we’ll start sending four people every two years.”

The habitat will consist of several housing structures that Mars One will  launch before 2023. In 2016, the company plans to launch the first supply  vessel. In 2018, it plans to send a rover.

Lansdorp says his four-person company will coordinate the launches, but it  will work with suppliers for the ship and rockets. For example, Mars One might  use the SpaceX Falcon Heavy rocket,  which is currently being developed as a launch system for larger spacecraft.

To help fund the project, Lansdorp says there could be a reality show based  on the selection process and test colony. Paul Römer, the co-founder and  executive producer of the show “Big Brother,” is an adviser for Mars One. Other  advisers include Nobel Prize winner Dr. Gerard ‘t Hooft and Brian Enke, an  analyst at the Southwest Research Institute in Boulder, Colo., who studies space  missions.

‘We will send humans to Mars in 2023. They will live there the rest  of their lives.’

Even with the complexities of sending a human to Mars, attention has centered  on the one-way trip. Those selected won’t come back to Earth, although a return  mission to retrieve the explorers might not be out of the question.

“In theory, it is less complex to get people back to Earth once you have a  sustainable settlement on Mars,” Lansdorp told FoxNews.com. “However, our  astronauts will be offered a one-way trip. We have no idea when it will be  possible to offer return tickets.”

Norbert Kraft, a former NASA researcher who studied group psychology for  long-term human missions, says the Mars One crew will have to be carefully  selected by psychiatrists and prepped to deal with psychological factors like  how to collaborate in stressful situations and anticipate problems.

Meanwhile, NASA has maintained that future missions will probably involve  robots. That said, in late 2010, a director of NASA’s Ames Research Center in  California did make an off-hand comment about a DARPA project to send a  spaceship with humans on a  100-year mission to Mars

Buzz Aldrin, the lunar module pilot with Neil Armstrong who landed on the  moon, has maintained for years that the only way for humans to reach Mars is to  plan a one-way mission.