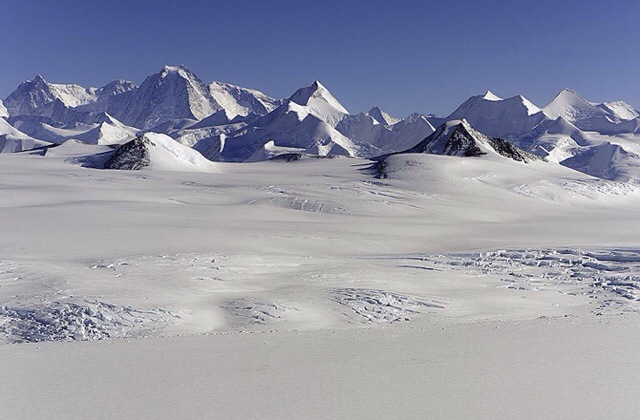 The trough’s valley is filled with deep ice (3,000 meters or 9,842 feet) as it stretches for 300 kilometers (186 miles) between the ice-encrusted Ellsworth Mountains and surrounding highlands. At its widest, the Ellsworth Trough spans 25 kilometers (15.5 miles). The canyon and valley system runs roughly northwest to southwest and ends by plunging into the sea.

For comparison, the Grand Canyon attains a depth of approximately 1,737 meters (about 1 mile) and extends 433 kilometers (277 miles) through the southwestern United States.

The ice-filled canyon gives geologists clues about how ice first overwhelmed Antarctica. The frozen coating of western Antarctica may have spread from the Ellsworth Mountains and surrounding highlands. The ice sheet covering the sea may have formed when the growing glaciers from the highlands reached the sea, similarly to the modern-day Antarctic Peninsula. Now, these highlands may serve as anchors for the glaciers and ice sheets as the planet continues to warm.

Scientists mapped the hidden Antarctic troughs using radar to peer beneath the ice, along with satellite images. The Geological Society of America Bulletin published their results.

“To me, this just goes to demonstrate how little we still know about the surface of our own planet,” lead author Neil Ross of Newcastle University, told Forbes.