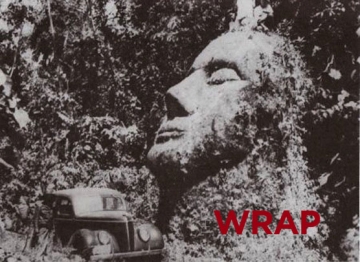 Revelations of the Mayans 2012 and Beyond.  The filmmakers claim this documentary will provide evidence that the Mayans had contact with extraterrestrials.

There is a new development with this story.

According to an article published by The Wrap today, the filmmakers have released a photograph they claim is “evidence of a pre-Mayan, alien civilization.”  The film’s producer, Raul Julia-Levy, released the photo to The Wrap, which shows a large, carved head in the jungle that was allegedly taken in southern Guatemala in the 1930s.

A letter from archaeologist Hector E. Mejia reportedly accompanied the photo.  Mejia claims the head sculpture in the photo “dates back to between 3500 and 5000 B.C. and is evidence of a superior civilization unlike any known to have lived on Earth.”  He points out that the “elongated cranium” and “fine characteristics” of the sculpture are not consistent with pre-Hispanic races of America, and therefore must have been “created by an extraordinary and superior civilization with awesome knowledge of which there is no record of existence on this planet.”

Julia-Levy claims that this photo is just one of several pieces of “evidence” that will be presented in the film.

And Julia-Levy also claims that Stephen Hawking is participating in his film.  The filmmaker provided The Wrap with a quote he claims is from Hawking that will be used in the film.  Hawking allegedy stated, “I warn humanity that aliens are out there. Just because the aliens were friends with the Mayans doesn’t mean they are our friends. Humans should avoid contact with aliens at all costs.”  This statement is reminiscent of Hawking’s grim statements from 2010, cautioning humanity against attempting to contact extraterrestrials.