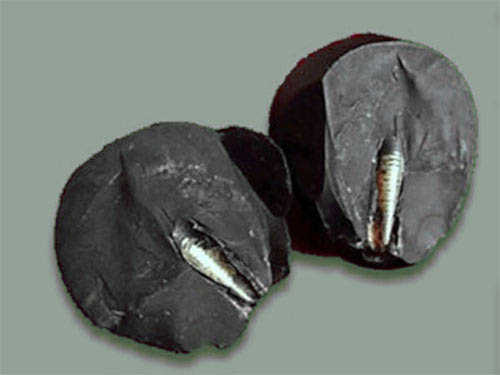 How can we explain stone that appears to have formed around a mysterious metal rod?

Found by rock collector Zhilin Wang in the Mazong Mountains of China, the hard black rock has embedded within it a metal rod of unknown origin and purpose. The rod has screw-like threads, suggested that it is a manufactured item, yet the fact that it was in the ground long enough for hard rock to form around it means that it must be millions of years old.

It has even been suggested that the rock is a meteorite and dropped to Earth from space, meaning the artifact could be extraterrestrial in origin.

Remarkably, this is not an isolated case of metal screws being found within solid rock; many others have been found:

In early 2000s, a strange rock was found in the suburbs of Moscow, Russia in which were embedded two screw-like objects.
Another rock found in Russia, when subjected to X-ray examination, was found to have eight screws within it!