The Malaysia Airlines plane, flight MH370, and all 239 people on board disappeared without a trace almost two years ago. But what happened?

The Boeing 777 aircraft took off from Kuala Lumpur International Airport in Malaysia at 12.41am local time.

Flight MH370, carrying 227 passengers and 12 crew members, had been scheduled to arrive in Beijing at 6.30am local time.

But the flight lost contact with air traffic controllers and the plane’s transponder, which communicates with the ground, was switched off less than an hour after take-off.

What MH370 wreckage has been found?

Part of the plane’s wing washed up on the remote Indian Ocean island of Reunion in July last year but search teams have not found any other traces of the airliner.

The Australian Transport Safety Bureau (ATSB) is leading the ongoing search, which is expected to finally conclude in June at a cost of £90 million.

Investigators have been searching for the wreckage across a 46,000-square mile area of the southern Indian Ocean off Australia’s west coast. 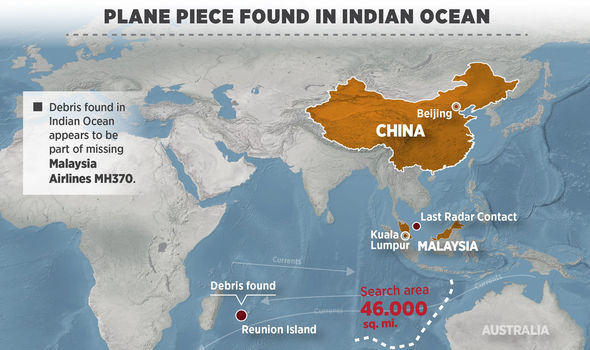 What are MH370 theories?

The ATSB search has until now been working based on the theory that MH370 became a ‘ghost flight’, flying on autopilot until its fuel ran out.

But if no wreckage is found in the Indian Ocean in the final weeks of the search, investigators could return to the theory that a rogue pilot deliberately downed the plane.

ATSB chief commissioner Martin Dolan said: “We’re not at the point yet, but sooner or later we will be — and we will have to explain to governments what the alternative is.

“And the alternative is, frankly, that despite all the evidence as we currently have, the possibility that someone was at the controls of that aircraft on the flight and gliding it becomes a more significant possibility, if we eliminate all of the current search area.”