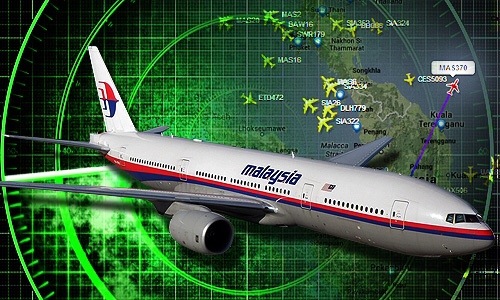 As each day goes by since the disappearance of Malaysian flight MH370, the mystery deepens.

The facts and rumours are mixed together, and conspiracy theories are ripe.

All we know, is that the plane has vanished. As the search continues, so do the conspiracy theories that continue to grow. Here we take a look at some of the most sinister and craziest 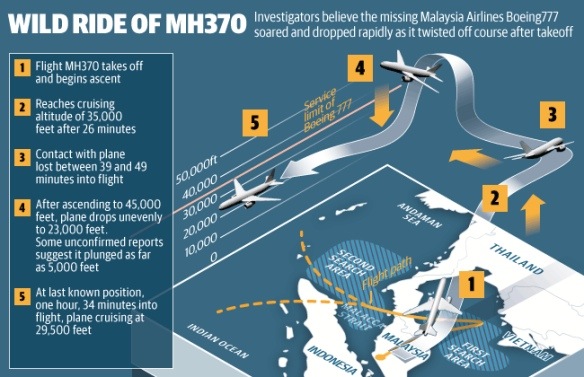 Plane was shot down during military ops

A shocking new book claims that missing Malaysia Airlines Flight MH370 may have been accidentally shot down and the search for survivors covered up.

‘Flight MH370: The Mystery ’ makes the incredible allegation that the airline was shot down by US-Thai strike fighters as part of a training drill that went horribly wrong.

But just 71 days after the Boeing 777 vanished carrying 239 people from 14 nations relatives say the UK published work is ‘too soon’ and ‘too insensitive’.

The book says the drill was to involve mock warfare on land, in water and in the air, and would include live-fire exercises.

It adds: “Say a participant accidentally shot down Flight MH370. Such things do happen. No one wants another Lockerbie, so those involved would have every reason to keep quiet about it.”

US military base conspiracy

The United States have been forced to flatly deny claims that the plane landed at its military base on the remote island of Diego Garcia.

There were strong rumours that the jetliner could have headed for the small coral atoll in the Indian Ocean, which sits around 3,500km from Malaysia.

However, a spokesman for the US embassy in the Malaysian capital said there was no truth in this speculation.

He told Malaysia’s Star newspaper by email: “There was no indication that MH370 flew anywhere near the Maldives or Diego Garcia.

A theory suggesting the plane was hidden as part of an experiment has circulated.

Citizens news site Beforeitsnews.com reported: “It is conceivable that the Malaysia Airlines Flight MH370 plane is ‘cloaked’, hiding with hi-tech electronic warfare weaponry that exists and is used.

“In fact, this type of technology is precisely the expertise of Freescale, that has 20 employees on board the missing flight.”

It also sparked theories the plane could have been taken by North Korea for similarly unknown purposes.

A reddit user wrote: “There’s no telling what crazy logic they [North Korea] might have for taking a plane. They literally have no grasp of reality and have been caught red handed kidnapping foreigners, making s**t up and generally being d****es.”

1) MH370 took off normally and headed on course to Beijing as planned. Just before Loss of Contact (LOS) the aircraft turned right to HDG040°. At the time the transponder stopped transmitting, based on ADS-B data, the aircraft was flying at FL350.

2) MH370 was following the usual route to Beijing.

3) Based on reports, the weather in the area was good.

5) Reports surfaced yesterday that the aircraft either: turned westwards before the last voice transmission – or- entered two new waypoints in the FMS (see ADS-C section).

6) The last radio comms were “All right, good night” transmitted to Malaysia Air Traffic Control at hand-off to Vietnam control. Vietnam was not contacted. It has been reported it was the First Officer’s voice. Although it is not a standard phraseology reply, the “good night”, “ciao”, “au revoir” etc way to greet ATC at hand-off is quite common and, per se, it does not constitute any evidence of something wrong in the cockpit.

7) The transponder stopped transmitting at 1:21AM LT.

8) There are reports of a climb to 45,000 ft, uneven descent and some changes in altitude. However, this changes are based on primary radar, and altitude data is uncertain at that distance from radar.

9) According to the Malaysian authorities, there were subsequent primary radar returns to the west of the Malaysian peninsula, over the Strait of Malacca and then north west. This is assumed to be a real return from MH370 even if based on primary radar echo.

10) SATCOM (see below for details) satellite system pings continued for 7+ (last ping at 08:11 local) hrs after LOS (loss of signal)

11) SATCOM pings do not locate the aircraft but based on correlation to signal strength latency, satellite height, it is possible to draw arcs (of a circumference centered on the satellite with radius = distance from the satellite) where the last ping may have been located. The arcs identify a series of points at the same distance from the satellite and are located along two directions, the first is north from Andaman Sea to Turkmenistan; whereas the second is south, over the Indian Ocean from southwest Malaysia to southwest of Australia. The last primary radar reply came from a point that is coherent with the northern arc.

12) The last SATCOM ping replied by the aircraft reportedly was at 8:11 am Malaysian time. At that time it would be dark on the north arc and light over the south arc.

13) SATCOM pings are hourly – so the 8:11 ping could be up to 1 hour before the aircraft stopped ‘pinging’: the aircraft onboard systems could reply to ping (for more details read below) even if the aircraft had landed, while it is difficult to believe they could reply after crashing.

14) A pilot of another plane in the air when the aircraft failed to contact Vietnamese control, heard a weird “mumble” or noise seemingly coming from a stuck microphone from MH370 but there is no way to confirm this.

15) According to the Malaysian PM, the way the aircraft has flown since LOS make investigators believe it was a deliberate action.

16) Reports of sightings in Maldives, landing in China etc have been debunked. Thailand has admitted to have possibly tracked the plane on Mar. 7, after LOS, but only gave this information some 10 days after the disappearance.

17) All the previous alleged sightings of the aircraft debris (Chinese satellite images, Greek ship reports, Tomnod crowdsourcing initiative etc) did not find anything that could be related to the missing plane.

18) Based on satellite imagery collected on Mar. 16, search and rescue aircraft, including a P-8A are investigating possible debris located 2,300 km to the southwest of Perth, Australia.