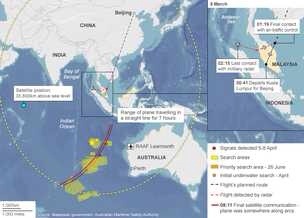 Mystery continues to surround the fate of Malaysia Airlines flight MH370, which disappeared en route from Kuala Lumpur to Beijing on 8 March.

The plane’s planned route would have taken it north-eastwards, over Cambodia and Vietnam, and the initial search focused on the South China Sea, south of Vietnam’s Ca Mau peninsula.

But evidence from a military radar, revealed later, suggested the plane had suddenly changed from its northerly course to head west. So the search, involving dozens of ships and planes, then switched to the sea west of Malaysia.

Further evidence revealed on Saturday 15 March by the Malaysian Prime Minister Najib Razak suggested the jet was deliberately diverted by someone on board about an hour after takeoff.

After MH370’s last communication with a satellite was disclosed, a week after the plane’s disappearance, the search was expanded dramatically to nearly three million square miles, from Kazakhstan in the north to vast areas of the remote southern Indian Ocean.

Then, on 20 March, Australian search teams revealed they were investigating two objects spotted on satellite images in the southern Indian Ocean and sent long-range surveillance planes to the area, followed by further sightings. An Australian ship and further vessels travelled to the area.

At 1400 GMT on 24 March the Malaysian prime minister announced that following further analysis of satellite data it was beyond doubt that the plane had gone down in this part of the ocean.

This was based on Inmarsat and UK air accident investigators’ analysis of the data relayed between the plane and ground station by satellite.

More potential debris was spotted by satellites but on 28 March the main search area was moved 1,100km (684 miles) to the north-east and closer to Australia, following further analysis of the speed of the plane and its maximum range.

Malaysian officials said that the debris could still be consistent with the new search area as ocean currents may have moved floating objects. However, no debris has yet been verified as being from the plane.

On 5-8 April, Australian and Chinese vessels using underwater listening equipment detected ultrasonic signals, which officials believed could be from the plane’s “black box” flight recorders. The pings appeared to be the most promising lead so far, and were used to define the area of a sea-floor search, conducted by the Bluefin-21 submersible robot.

But Australian officials announced on 29 May that the search had found nothing and the area where the signals were heard could be ruled out as the final resting place of the plane. Efforts would now focus on reviewing data, surveying the sea floor and bringing in specialist equipment, the Joint Agency Co-ordination Centre (JACC) said.

On 26 June, officials announced a new 60,000 sq km search area some 1,800 km west of Perth. The operation will begin in August with detailed mapping of the sea bed.