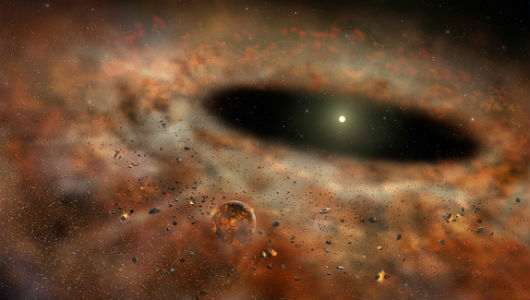 A dusty disk around a distant star has faded surprisingly fast, leaving scientists few clues to how it disappeared.

Only a few years ago, the space around the star TYC 8241 2652 1 was filled with dust and gas, but recent observations show the region — an ideal spot for alien planets to form — has all but vanished.
“It’s like the classic magician’s trick: Now you see it, now you don’t,” principal investigator Carl Melis of the University of California, San Diego said in a statement. “Only in this case, we’re talking about enough dust to fill an inner solar system, and it really is gone!”
The star is 450 light-years away, in the constellation Centaurus. At 10 million years old, it is a younger version of our 4.5-billion-year-old sun.
A quick exit
Tiny specks of dust orbiting a star absorb its energy and shine in infrared light. As the glow brightens and dims, astronomers can estimate how much material surrounds the star.
The disk around the star TYC 8241 2652 1 was discovered in 1983 and  remained relatively constant for 2 1/2 decades. Scientists estimated that 1,000 trillion grains of dust — the equivalent of all the sand on the beaches of Earth — circled this younger version of our sun.
But in 2009, things changed.
Observations by the Gemini South telescope in Chile and several other instruments found that the infrared light emitted by the dust had dropped by more than half. In subsequent studies, the amount of dust around the star had all but vanished, dropping by a factor of nearly 30 in two years.
Such a dramatic change is astonishingly fast when compared to the million-year time scale of most astronomical events, researchers said.
Source:  Mother Nature Network, READ MORE