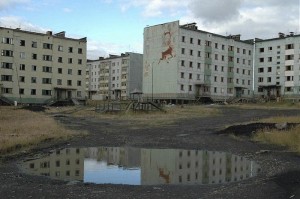 In May 1962, five members of a volunteer first company were hired by the Centralia Borough Council to clean up the landfill of the town of Centralia in Pennsylvania. After burning the dump, the firefighters let the landfill burn for a while. When it was time to put out the fire, they were unsuccessful. The fire continued burning for days until it spread into the numerous coal mines underneath the town. Immediately, the byproducts of the fire such as carbon dioxide and carbon monoxide affected the health of the residents. Most people voluntarily moved out of the town while other accepted buy out offers by the government. Despite numerous attempts to put out the fire, mines continued burning with no sign of stopping. As a result, the few remaining residents of the once lively town were forced to move out.

­At one time, the tow­n of Centralia, Penn., supported almost 30,000 residents, with stores, churches, hotels and bars. It was a boomtown, established in 1866 and built from the profits of coal mined out of the Pennsylvania hillside. It was this same coal that led to Centralia’s almost complete demise.

In 1981, with the fire burning steadily for almost 20 years, the last straw came for most of the town’s residents. A 12-year-old found the ground beneath his feet had literally opened up. T­he boy managed to grab onto a root and was rescued by his cousin from the 150-feet deep sinkhole filled with poisonous carbon monoxide [source­: Washington Post].

The federal government allocated $42 million for the re­location of Centralia’s residents in 1982, essentially declaring the town a lost cause [source: DeKok]. Most Centralians took the offer of help, leaving the town almost entirely abandoned. A few chose to stay; around 20 residents remain in Centralia as squatters in what were once their legitimately owned homes. The government closed the main egress into town, Route 61, detouring traffic, and effectively cutting off the burning town and its remaining inhabitants from the rest of the world. Those roads that haven’t been reclaimed by vegetation are buckled and cracked, with white noxious gas spewing from underground. Most of the buildings either caught fire or were leveled to keep them from burning. The town’s cemetery and a few houses, some still inhabited, remain.