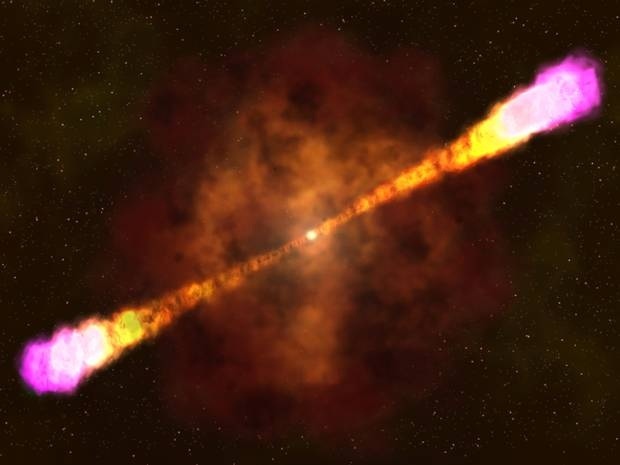 The biggest and brightest cosmic explosion ever witnessed was captured by orbiting telescopes last spring, astronomers have said.

Offshore Investor Spain?
Find best returns for your money. From £50k+ / £500+ monthly.
expatmoneymanager.com/Free-Report
Is Jesus Really God?
Discover the Evidence From Scholars About Jesus’ Claims to be God
Y-Jesus.com
Expatriate Savings Advice
£50k-£1m Or £250+ Regular Savings? Find The Best Interest Rates Today!
www.OffshoreSavingsDesigner.com
Branded ‘the monster’ by scientists, lucky for us on Earth, the huge gamma ray explosion happened in a far off galaxy 3.7 billion light-years away.

A gamma ray burst happens when a massive star dies, collapses into a black hole, explodes in what’s called a supernova and ejects energetic radiation. A planet caught in one of these bursts would lose its atmosphere instantly and be left a burnt cinder, scientists say.

Although orbiting Nasa telescopes have been capturing bursts every couple of days for more than 20 years, this one smashed records, four studies published Thursday in the journal Science said.

Witnessed on April 27, the explosion flooded Nasa instruments with five times the energy of its nearest competitor, a 1999 blast, said University of Alabama at Huntsville astrophysicist Rob Preece, who authored one of the studies.

In general, gamma ray bursts are “the most titanic explosions in the universe,” Preece said, and this one was so big that some of the telescope instruments hit their peak. It was far stronger and lasted longer than any previous ones.

“I call it the monster,” Preece said. One of the separate studies, produced independent of Preece, also used the word “monster” in its title.

“These are really neat explosions,” said Peter Michelson, a Stanford physicist who is the chief scientist for one of the instruments on a Nasa gamma ray burst-spotting telescope. “If you like fireworks, you can’t beat these. Other than the Big Bang itself, these are the biggest there are.”

Scientists have assured that it is extremely unlikely a gamma ray burst, especially a large one, could go off in our galaxy. Harvard’s Avi Loeb put the chances at less than 1 in 10 million.